The subject of Louis A. Del Monte’s book ‘Genius Weapons’ comes more from its sub-title, ‘Artificial Intelligence, Autonomous Weaponry And The Future Of Warfare’. As he describes in his introduction, America is actually lagging behind Russia and China in making robotics and AI working together and where battles will be between machines rather than people.

The Genius Weapons of the title are autonomous AI who are solely under the command of themselves than their inventors. Del Monte writes as though Asimov’s Three Laws of Robotics will be incorporated into any AI system, although I have read elsewhere that in terms of interpretation don’t really work because they can be so easily put in conflict with each other. Well, maybe the third law of self-protection but how do you work with doing no harm or obeying humans explicitly if their give conflicting orders? An AI having to decide between saving one or several people would immediately have a conflict of choice. 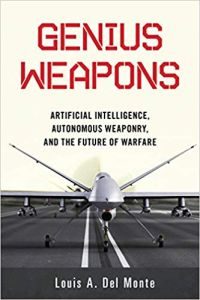 Something that did make me think is how computer tech is being described as ‘smart’ as opposed to ‘AI’ does make me wonder if it’s being done to make it less fearful by changing the label. Then again, how far does complex algorithms go before they become AI? Mind you, considering how these algorithms being used to analyse buying trends and so forth below the level of you being aware until it pops up in an email thinking if you bought this then you’ll buy this. I haven’t found them particularly accurate, especially when they suggest I buy the same item again. A lot of this depends on how the original programming was done and why the programmers didn’t cover all the options.

What should send a shiver down your spine is how much Russia and China are investing in cyber-tech and over-taking us other countries out there, more so in military-tech. You’d hate to hear how many times SFC blocks cyber-intrusions and the only attraction is the large number of hits we get. At least, I hope that’s the reason.

Del Monte suggests that it is the smaller population of the nation that is pushing Russia ahead with smart weapons but it made me want to investigate and turn the 2018 numbers from https://www.globalfirepower.com/into percentages:-

I was going to do a comparison to how this goes up in, say, World War 2, but in war-time, with compulsory conscription and casualties, the figures are likely to be far higher, not to mention how the non-military are also working towards the same aim.

Looking at the statistics I turned the numbers based on unit population, Russia has a bigger military force than USA and China put together. China’s military force only appears smaller because it has a population larger than the combined USA and Russia. This doesn’t necessarily mean personal matches weaponry, let alone how advanced it is but numbers alone aren’t the whole equation.

All military would like to be the most advanced they could be. I do agree with him that smart weapons can cut the number of personal needed, although it’s very telling that he says the USA doesn’t have enough people to pilot drones. In some respects, I suspect their recruitment campaign is targeting the wrong type of people and maybe they should explore game players. Rather scarily, autonomous robots are classed by USA military as the ‘Terminator Conundrum’.

Del Monte’s description of ‘swarming’ where smaller craft can outflank bigger ships and is better run by AI makes for an interesting topic. However, unlike his examples of army ants or killer bees, I tend to see this more akin to how hyenas work to beat their larger prey.

His disclosures of nanotech in development by the military but kept top secret makes sense. Any nation involved in this is not going to reveal how far they’ve got but you do have to hope there are sufficient safeguards so it doesn’t attack its creators. More so as De Monte goes on to explore how AI machinery can learn to fight amongst themselves for self-preservation and keeping supplies to itself. The new AI is being seen as artificial life and is definitely getting into SF territory. This goes as far as brain implants in humans.

What is really worrying is that Del Monte points out that 23 different countries are working on AI smart-tech and weaponry and yet there is no United Nations agreement on protocols. There’s more towards alien visitors which is still a remote possibility compared to this. It feels like a race to be first forcing the others to bow down. Autonomous weaponry could be as dangerous to its creators as to any opposition unless there is a means to turn them off.

I wasn’t aware of the Russian remote control Teletanks in World War 2 to make their might bigger than it actually was.

Going back to the UN, there is an international humanitarian law that prohibits certain kinds of warfare in attacking civilian targets. The problem is this law is broken all the time, especially in the Middle East. So super-smart weaponry is likely to go the same way. I do wonder if any nation who uses them is going to worry if their autonomous weapons turn on them without some sort of kill switch.

I’m a little concerned about how AIs can be endowed with imagination. In humans, it’s more like a freewheeler in your head picking out ideas at random. The real trick is working out which is the best ideas. An AI would determine that mathematically in terms of odds than instinct. We’ve seen that a lot in SF and we can’t afford any AI that doesn’t do enough to protect mankind, even from itself.

Del Monte’s view that aliens arriving on the White House lawn without any knowledge of our language but understand how we exploit our energy resources as the start of communication did make me ponder. Starfarers are likely to be way ahead of us in power sources and we probably wouldn’t even be on their scale and they are less likely to share their knowledge because of possible misuse. Of course, they might want to see us destroy ourselves.

The militarisation of space has some surprising abstainers who haven’t signed an international treaty not to do that and these are the USA, Russia and China, all three of which have the most time in orbit. One can only hope space debris acts as its own deterrent.

Del Monte’s ideas of the future doesn’t take into account any of the other current problems, like global warming, which would mess things up. I would disagree with him that the UK would prefer to be another state belonging to the USA. You’d probably get just as big a number saying we’d accept the colony countries back into a British Empire.

Having AI robots keeping war in check is nothing new for us SF fans. AI is also dependent on who programs it and there are so many protocols that need to be figured out, let alone tested that they are long-term projects. In some respects, I tend to think AI is going to come in the back-door with so many algorithms meshing together. The ethics check on AIs raises something scary in philosophical points. If an AI can be convinced that there is an after-life, then it wouldn’t think killing humans in our reality a problem.

You’re seeing far more of my criticisms than what I learnt from this book. There really is a lot to be learnt here, some of it very worrying in terms of country regulations. The fact that so many SF trope names are borrowed does tend to suggest that our genre is being used as a template. One can only hope they keep that in the backs of their minds that things can go wrong and take extra care when bringing any of these machines on-line and into military service and have more than one dead switch.