Seeing a stylised Alfred E. Numan on the cover of Illustrators # 5 seems an odd choice until reading the first interview with Mick Brownfield who adopts his art and style to the requirement of his clients. He relates how a couple generations back that the art editors in those days had at least a background in art to know what they want unlike today where he ends up giving more explanation to their grunts. Seeing examples of Brownfield’s art, whether it’s from Heineken wall poster adverts to ‘Radio Times’ and ‘Time Out’ covers, then you would certainly have encountered some of his work over the decades if you live in the UK. He even has a taste for SF which is often reflected in the art which can switch from pen and ink to full painting. His secret to getting so much work is being able to work fast to short deadlines although at his greater age, tends to shy away from working late into the night anymore.

Brian Sanders has been painting for years but he was brought to modern attention doing a poster for season 6 of ‘Mad Men’. Significant to us, though, was him being on set doing paintings of ‘2001’ in production for Stanley Kubrick. Only two of these paintings are available and shown here and were huge at 4 square feet, so you have to take that into account here the use of broadstrokes more than detail.

Twins Janet and Anne Grahame Johnstone specialised in children’s books, complementing in their art where one was better than the other. Of significance to UK readers, they created the designs in the early 60s of ‘Andy Pandy’ and ‘The Flowerpot Men’ puppets which they carried on in the book versions. I love connections like this. Even author Dodie Smith loved their work for ‘The Hundred And One Dalmatians’. Their uses of style and simplified line and paintstroke is actually very strong. All too often, it’s too easy to get too complicated but they had a masterly touch.

Derek Eyles (1902-1974) is an interesting from a British point of view as most of his work was painting western scenes where he excelled at painting horses and was used as the example to other artists how to get it right. Seeing his paintings here, he captures the horses in motion, often with only one leg touching the ground, so I can see the appeal. Eyles also turned his hand to the occasional comicstrip as well and equally good with pen and ink as well.

The final piece is a look at Frank Bellamy’s ‘Heroes Of Sparta’ that he illustrated for ‘The Eagle’ comic and which The Book Palace’ have available as a separate volume.

As always, ‘Illustrators’ is a joy to read and I’d be surprised if anyone comes away without not learning anything. 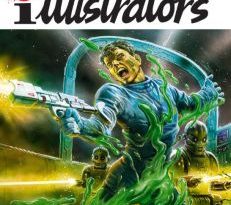 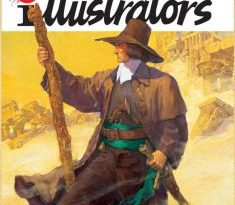 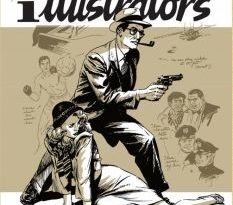