In ‘The Princess Of Dhagabad’, the princess managed the impossible: she freed a djinn from slavery. In defiance of her father’s plans and what was best for the kingdom, she followed her heart with the belief she and Hasan would live happily ever after. In ‘Goddess Of The Dance’, the princess, now known by her name Gul’Agdar, comes to terms with the naiveté of her choice.

Gul’Agdar is still expected to marry Prince Amir of Veridue and, as a free man, Hasan is sent away from the palace. The Voices want to recapture the former djinn and a collection of wizards and sorcerers are interested to learn his secret, how he, an all-powerful one, can remain free. Then there is the prophecy, an obscure, all but forgotten scroll foretelling the end of everything.

Hasan undertakes a quest to find this scroll, hoping he can save Gul’Agdar from the same fate that befell him. Though she knows no magic, he believes she is at risk, that the Voices may seek to imprison her as they did him lest she destroy the world. Hasan’s search for knowledge occupies much of his time, but he is always available when the princess calls. In his absence, Gul’Agdar embarks on a quest to learn magic. Through her dreams, she relives the life of a goddess of the dance known as Thea. She begins to practice what she learns, opening herself to the possibility of magic. Hasan remains unaware, but the Voices do not. Neither do the other agents working against the pair.

All conspire against Gul’Agdar and the princess. Her father, in possession of a son, at last, replaces her as heir. The kingdom of Veridue falls in with the Caliph in a plot to kidnap the princess and the other sorcerers lure Hasan to the desert where a trap has been prepared. All plans fail to take into account the very factor that set these events in motion: the bond between Gul’Agdar and Hasan. Once again, the deep and abiding friendship between the pair stands against all obstacles, and the princess proves she has the power to free more than one slave.

Again, I was drawn quickly into Anna Kashina’s world. I could easily imagine the sights, sounds and scents of Dhagabad. The characters from the first novel continue to grow and the deepening love between Gul’Agdar and Hasan unfolds as sweetly as in the first novel. The continuing swirl of politics and intrigue is cleverly plotted. The meddling wizards, the long awaited for son for the sultan and the shifts of power all drive the plot forward, giving the princess’ adventure more substance. There are no glimpses into Hasan’s thoughts this novel, but the lack is more than made up for by the story of Thea as it unfolds in Gul’Agdar’s dreams.

Goddess of the Dance is another wonderful novel. I am eager to continue reading the adventures of the princess and Hasan. 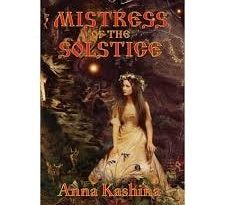 Mistress Of The Solstice by Anna Kashina (book review).

Mistress Of The Solstice by Anna Kashina (book review).