There seems to be a trend to sub-divide fantasy into smaller and smaller sections. It may just be that the publishers are attempting to tickle the jaded palate. Once the fashion was for the sagas as written by David Eddings and Terry Brooks with hidden royalty and quests against magical odds. When sales fall off, something new is required. A good fantasy novel has always had an element of political scheming and maybe a few wars.

Upping the ferocity of the magic isn’t always the answer unless it is accompanied by something else. Now, for the bloodthirsty reader, there is Grim Dark. One definition of Grim Dark is ‘dystopian, amoral and violent’ and George R.R. Martin’s ‘Game Of Thrones’ is cited as an example. The definition, though, doesn’t apply to all the characters, merely the general ambience that accompanies the tale. 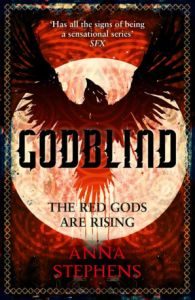 Anna Stephens is not just a new girl on the block but ‘Godblind’, her debut novel, falls into the category of Grim Dark. The part of the fantasy world in which the action takes place is the battleground between two factions of Gods. The Red Gods thrive on the letting of blood and the Gods of Light prefer a more peaceful community over which to exert their sway.

Nearly a thousand years before the onset of this narrative, the Red Gods were banished behind the Veil and their followers exiled to the mountains to the west of the fertile plains of Rilpor. Like many a situation, the reasons behind a crisis can become lost to memory and, although traditions are upheld, beliefs and the reasons behind the traditions fade. To the standing armies of Rilpor, the enemy is as human as they are and if they invade, the country must be defended. Naturally, those living in the mountains, the Mireces, will want to invade a country that is plentiful in cattle and wheat and where starvation doesn’t exist or so they think. The Red Gods, the Dark Lady and Gosfath, God of Blood, intend to use bloodshed to force their way back into the world and banish the Dancer and the Trickster, the Gods of Light, into exile.

Events have already been set in train using subterfuge by Lanta, called the Blessed One, and who is high priestess of the Dark Lady, but they are triggered when the slave, Rillirin, kills Liris, king of the Mireces. Fleeing and, with a pack of Mireces on her tail baying for her blood, she is rescued by Dom. He is a visionary. The Gods speak to him, causing him to have what appears to be an epileptic fit as his mind is overloaded. He recognises Rillirin as important and urges the Wolves, people who live between the opposing factions and are fiercely protective of the forests they hunt in, to defend her. This is the start of a series of bloody battles. The body count is extremely high, which is what the Red Gods are after.

The story is told in a number of short chapters, each headed by the name of the viewpoint character for this segment, as well as a time and place so it is easy to track the action with the map at the start of the book. The one thing missing from the map is a scale so it is difficult to judge distances. There are at least ten viewpoint characters, far too many and, as so little time is spent with each, it is difficult to get to know them properly. It isn’t easy to know who the reader should be rooting for and, as a result, it is hard to care about what happens to them.

This is a very male-orientated society but the novel is peppered with strong female characters. There are the high priestesses on each side. Lanta and Gilda, both ruthless in their own way. High priests don’t feature, an oddity for this kind of society. Among the Wolves, women have equality and fight beside the men. While in the Riporian army, there is only one woman, Tara, who has fought her way up to captain through the ranks. It almost feels as if she is there as a token and with a male author this might be so as she has no feminine side, simply a sense of grievance about her male counterparts who don’t treat her seriously. There is no female royalty, the Riporian queen was murdered before the book started and neither of her sons seem interested in courting.

Mirceres kings don’t marry and they make do with consorts. The issue with having a large standing army is that although the fighting side of it is generally left to the men, there will be plenty of women around. The camp followers will be omnipresent. Settled in barracks there will be laundry-women, seamstresses and healers. Small villages will erupt outside containing taverns and brothels. Anna Stephens’ society has few blurred edges. When the army marches, it should be followed by a vast supply train of wagons and women. There is no hint of one here. Perhaps that is why some Mirces soldiers stop in the middle of a fight for a bit of rapine.

A problem that often inflicts fantasy novels is that there is little outside the sphere of action. Rilporin, the capital city is on a navigable river, presumably with access to the sea, yet there is no sign of foreigners from that direction. It would have been built there for the opportunity of trade but we have no idea what lies beyond the edges of the map. Maybe the Gods have drawn impenetrable barriers around their territory. It would be nice to know.

While it is easy to pick holes in a fantasy novel, it must be remembered that this is a debut novel and the first book in a trilogy. Most writers grow with time and experience and there is enough good material in this volume to hope that problems here will be ironed out and later books will show the promise hidden here. There is, however, a readership that will read this book for what it is at heart, a war adventure with piles of action executed at a terrific pace. 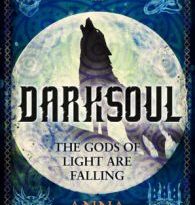