I haven’t seen ‘Elvira: Mistress Of The Dark’ for some time. Now with its blu-ray release, I’ll be watching it four times, as three of them contain audio commentaries. Unlike the Americans, we British only really came across Elvira originally in this film and the Marvel magazine, so we didn’t know much about her other than here.

Director James Signorelli has problems with his introduction so you’ll have to wonder which ones are the out-takes and what is in the bottle he is drinking. 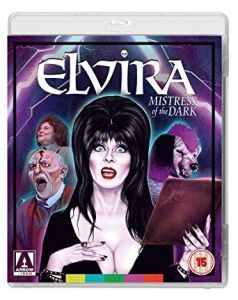 Elvira is a horror channel host who quits her job one moment and will lose her Los Vegas show unless she has $50,000 to finance it. Her luck turns when a telegram arrives and goes to the town of Fallwell where she gets her Great-Aunt Morgana Talbot’s inheritance. Elvira doesn’t exactly fit in when her car’s engine packs in. She’s a more than a little disappointed when all she’s left with is the house, her Great-Aunt’s dog, whom she renames Gonk, and a recipe book. Her Great-Uncle Vinnie (actor W. Morgan Sheppard) wants the recipe book and Elvira is prepared to sell it except the book goes missing. She gets the help of the local students to do up the house to make it easier to sell and she even has problems finding a job to make some money while waiting. Unfortunately, the local council don’t like her influence and want her out as well. Even with some unusual painting, no one is interesting in buying. Vinnie is determined to get the book but his two henchmen, Travis (actor Jeff Conaway) and Billy (actor Frank Collison) to get it for him.

Elvira talks her way into giving local cinema owner Bob Redding (actor Daniel Greene) a chance to host some horror films on a midnight showing and has to persuade the students to defy their college head’s order from not seeing he to go. Of course, things don’t go quite to plan when Patty (actress Susan Kellerman) succeeds in tar and feathering her. Later, after a kerosene bath, she finds the recipe book, Elvira decides to make a meal for Bob, not realising quite what it is, although the ingredients are in the kitchen for the casserole. It might well smell right but the look isn’t, so she improvises and they get a demon instead. Too many potato crisps I reckon. They also discover her Great-Aunt was a witch and what Great-Uncle Vinnie is. She also gets her revenge at the Fallwell Morality Club Annual Picnic although not in the way she imagines.

Of course, the townfolk want revenge later, all helped by Vinnie who wants Elvira denounced as a witch and burnt at the stake. For the rest you need to get our own copy.

Of course it’s a silly film. It isn’t supposed to be taken seriously. Elvira has a good supporting cast to work off of. Watching this, I did wonder if Talbot is Elvira’s surname? Oh, someone called Cassandra Peterson briefly appears as Elvira’s mother. You’d think they’d give her a bigger part.

No, it hadn’t escaped my notice that two of the performers also appeared in ‘Babylon 5’. I also just realised where the Soul-Stealer got some of his lines. Oddly, neither of which is mentioned in any of the commentaries.

Now for the extras.

The ‘Too Macabre: The Making Of Elvira: Mistress Of The Dark’ is a revised 97 minute mix of interviews with cast and production. Uniquely, NBC funded the movie. If you want to see some of the scenes again, this is also a good way to see them, plus some discussion as well. Watch it after the first viewing because it puts a lot of things into context. The analysis of the failure at the box office largely basically because it was too 1950ish and New World going bust, in a flat way not ones in a bra. The video success was far better. Pay attention to the end credits.

‘Recipe For Terror: The Creation Of The Pot Monster’ is a 22 minutes revision of the original. They couldn’t afford to go big budget so went puppet with work from Doug Beswick but it’s the puppeteers who discuss how it was filmed. Steve Laporte worked on Morgan Sheppard’s make-up, so you get information on this as well.

What else have we got? Two trailers. A six section image gallery. Shame there’s no manual over-ride but I’m only watching the advance disk and it spreads out over 40 minutes.

Three audio commentaries, so let’s start with the first with Cassandra Peterson, actress Edie (Chasity Pariah) McClurg and co-writer/bit part John Paragon. Don’t expect Miss Peterson to drop in too many puns but is brings out a lot of knowledge along the way, except when it slips her tongue and the others help or the number of takes for some shots to be taken. Don’t forget, this film was made under $12 million in 8 weeks. Be prepared to be entertained. Can the other two audio commentaries beat this one?

The second audio commentary is with director James Signorelli and Fangoria writer Tony Timpone who is interviewing him. It took over 2 hours for the Elvira wig to go on and almost as long for her costume. There are a lot of Elvira’s former Groundlings group pointed out along the way. There’s a lot of information here, some occasionally contradicts what is said in the first commentary but don’t forget there’s a span of 30 years here.

The third audio commentary is with Elvira webmaster Patterson Lundquist. Much of it is pointing out the details. I think the biggest reveal that there were 4 Elviras, each having different parts of her or her action. There are several firsts with this film and some of the dialogue is quoted into later films. If New World hadn’t gone bust, Lundquist thought it would have been a bigger success.

I’m amazed that the music for her second film was released on CD but not for this film. Someone really ought to consider it. I’m always careful with watching the same film with audio commentaries too close to each other and, on this occasion I spread them over a week without any problems. Whether this is because of the strength of the interviews or the film is debatable but it does well.

Oddly, except for a couple risqué but very funny jokes, this film is practically nearly a family film. From the commentaries. Elvira watered down her Movie Macabre dialogue a lot and would probably get away with a lot more today. What is enjoyable about it though is you get to enjoy repeat viewings which is important with comedy films. Now excuse me, I have to see a woman about a dog or is it a mouse or is it a…