‘Christmas Magic’ is an anthology of Christmas stories suitable for the festive season. Many, not all, are suitable for children. Some have a dark or satirical twist. It’s a few years old but still available first and second-hand from the usual sources. 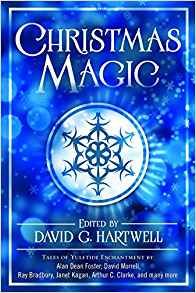 The charming opener is ‘Scramblepipe Tries To Understand: The Gnomes Who Set Out For Christmas And Found That The World Is Round’ by Anonymous. The title is not much shorter than the story and sets out the premise nicely. I liked the ending and the children will love it.

They might not love ‘Nackles’ by Donald Westlake but, on the other hand, kids do have a certain darkness to their nature. The premise is that Santa Claus is a sort of god and, if enough people believe in a god, he exists. But for every good there is an evil so a nasty father conjures up Nackles to frighten his unruly brood. Another clever one.

There is more adult fare in ‘Another Dime, Another Place’ by A.J. Austin which is long enough to be classed as a novelette. Not adult in the modern sense, sex and violence, but in theme. A well-paid business executive buys a postcard from an old street lady just so she will leave him alone and finds his life changed. However, his attempts to solve the mystery of her power gets him into deep water or rather dark alleys.

‘Bedlam Inn’ by Madeleine Robins has a traveller on Christmas Eve looking for a place to stay and finding the inn full. He sleeps, naturally enough, in the stables. As a 17th century Christian soldier, the irony is not lost on him. He finds a damsel in distress in the stable and some other company, too. Well written, witty and entertaining.

‘Grandfather Christmas’ by Robert Frazier and James Patrick Kelly puts the usual family difficulties in a modern setting. Grandma has died and her ex-husband, dead a while, pops up in virtual form to join the family for the festive season. Unfortunately, someone wants to permanently delete him. The intriguing possibility of a kind of cyber afterlife in the future fit well into the Christian theme and the ending was perfect according to the terms prescribed by Robert Silverberg: a surprise but, on reflection, inevitable.

The big names on the cover didn’t really deliver the goods in this anthology. ‘The Outpost Undiscovered by Tourists: A Tale Of Three Kings And A Star For This Sacred Season’ by Harlan Ellison seems to be more of a joke than a story and one without a punch-line that I could see. Alan Dean Foster contributed ‘Diesel Dream’ which was better. I liked the truckers first-person narration and it definitely had a punch-line but it wasn’t especially Christmasy.

‘Santa Clause’ by Robert F. Young has a very un-Christmasy deal with the devil scenario. Ross sells his soul on condition that there should be a Santa Claus just for him. This means that when he writes his Christmas list, all his desires will be satisfied. The catch is that the Adversary, as he’s called here, claims he can’t sub-divide childhood fantasy and if there is Santa then there are other beings, too. A clever premise well-delivered but the ending baffled me.

My favourite in this collection is ‘Death In The Christmas Hour’ by James Powell. First published in 1983 in ‘Ellery Queen’s Mystery Magazine’ (so it predates ‘Toy Story ‘by more than ten years), this features a gang of familiar characters in a toy shop window display who come to life on Christmas Eve. Punch, Judy, jack-in-the-box, a toy bear, a toy soldier and, best of all, a toy Sherlock Holmes. Handy that last because there’s a murder. This was great fun with several witty asides.

‘The Boxing Day Spectre’ by Kit Reed gave a Christmas veneer to a haunted house story. The family problems will resonate with many young couples dependent on the bank of mum and dad for that vital house deposit. All in all, I enjoyed it.

As Charles Dickens practically invented the modern Christmas, it’s appropriate that he should feature in here somewhere. ‘Household Words: Or The Powers That Be’ by Howard Waldrop has Dickens doing one of his famous readings, this time of his most famous Christmas story. Oddly, the story and the character names are changed slightly but it’s supported by sound knowledge of Dickens’ life and work.

I’m not especially keen on the commercial fest known as the Christmas season but do enjoy the charitable Christmas spirit and the day itself. As long as one keeps expectations reasonable, it can be a pleasant time of year. This is a varied collection and that may be a flaw. Commercially, it would have been better split in two with one anthology of nice stories for those who want to keep Christmas sweet and one of darker tales for fans of that ilk. Even so, the broadminded can enjoy it as it is. 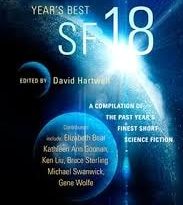