With an introduction for the 72 minute pilot episode that says the police need a better way of policing, you can’t help but feel like saying ‘Robocop’, except this happened a lot earlier in 1976 and this robot cop, John Haven (actor Michael Shannon), was made to look like a human. A functioning bio-synthetic android by its creator’s definition. Seeing his chest open, he’s really a robot. A Mark 5 in fact as defined in the last episode.

Commissioner Forman (actor John Larch) is reluctant to use Haven but is convinced to try the robot with an average police office, Joe Cleaver (actor Ernest Borgnine), and isn’t told what it is as he takes on a training detail. 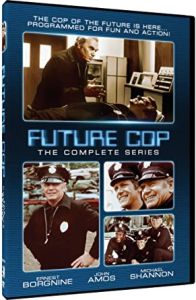 Stopping a Porche car thief gang, Haven is damaged and Cleaver as one of the gang escapes and talked into keeping his weakness secret by its inventors. In the meantime, Cleaver is back with his old partner, Bill Bundy (actor John Amos), and Forman offers them up to tactical but they refuse. Cleaver says no and Bundy goes along with him but hears a phone conversation later that his partner really wanted to move up. They split and Cleaver gets a repaired Haven back and to pursue the gang leader.

In many respects with what I know about American 1970s pilots, this one has a very tight budget, depending more on character interplay than real physical action. Haven does not have super-strength and is literally a computer on legs, albeit human-looking and totally dependent on following literal orders and still learning about humans and their odd slang. He or it is better than humans in some things but still learning to interact with people. Bearing in mind that the likes of ‘The Six Million Dollar Man’ had been around for a couple years then this looks more like an attempt to do the first one with a robot star and them finding their feet without looking like a bionic man.

For the first episode, things have been adjusted from the pilot. Bundy probably didn’t get on with tactical and is back with Cleaver but knows nothing about Haven’s background. Cleaver also seems to have been given a lot of leeway as he wants to solve several murders of boxers and gets Haven undercover as a boxer. Although Haven is programmed to avoid violence, he can avoid being punched and takes out his opponents with a single punch. He’s not super-strong but he is metal inside.

In many respects, this series is really low budget and mostly explores Haven as a walking computer than any real physical attributes. I think it might have made more sense to have made Cleaver and Bundy as detectives than street cops considering the orientation of the episodes and not seem accountable when they go off on tangents not compatible to normal patrols. Certainly, Bundy should have been asking more about the unusual rookie.

Whatever, six episodes was enough to end the series but with a 98 minute episode, ‘Cops And Robin’, looking like a year later. Bundy has been promoted to sergeant, and now knows what Haven is, and Cleaver and Haven still roam around in a police car. Haven also has a new engineer, Dr. Alcott (actress Carol Lynley), who wants Cleaver to take the robot home to widen his education and develop his emotions.

At the same time, the widow of Cleaver’s former partner, Marge Loren (actress Elizabeth Farley), has been in hiding and Cleaver tries to talk her into giving state evidence and unknown to them, the villain of the piece, Wayne Dutton (actor Terry Kiser), has put a contract out on her. A bomb explosion convinces her to give evidence but only if 5 year-old daughter Robin (actress Natasha Ryan) is protected and Cleaver and Haven to look after her. But first, Cleaver wants to be the one to arrest Dutton although he’s soon out on bail and he has someone in police headquarters trying to find them. I’m giving a bit more info than IMdB has here without going spoiler.

Much of these stories are standard police fare with a small robot twist. Undoubtedly the small budget restricted what they could add as a Science Fiction flavour but make it family viewing. Much of it is on par for the mid-1970s and certainly wasn’t shown in the UK as far as I can remember. Treat it as an odd curio.