Written in 1988 before the publication of his other various well-known, award-winning and huge novels, ‘Zodiac’ is Neal Stephenson’s fast-paced and irreverent eco-thriller that mixes organic chemistry with environmental campaigning and zany humour to produce an indefinable cocktail of a novel. 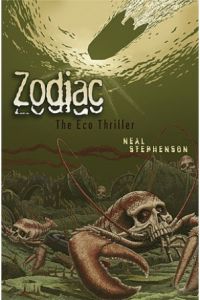 The version of the book I received an ARC of Subterranean Press’s 2010 hardcover deluxe edition. It’s evidently a bit late to be an ARC review now, but the age is irrelevant to the story. Although set in the 80s and obviously a bit dated in terms of technology, the state of the world’s environment is just as relevant today. I’d like to think that environmental regulation in the USA has improved since the book was written, but I have no idea whether it has. In any case, similar stories of horrendous pollution caused by big industry are common throughout the world and, just this week, I came across a news story of several children being hospitalised after swimming in polluted water near an abandoned paper mill in the UK.

From the description of the main character, Sangamon Taylor, generally known as S.T., you would imagine him to be some kind of typical tree-hugger or duck-squeezer as they novel puts it. He is in fact a chemist, engineer, scuba diver and possessor of several other random skills that combine well for his work as part of GEE, the Group of Environmental Extremists. They are non-violent extremists, but the action they take to block up toxic outfalls, confront complicit executives and wage war against pollution are rather more satisfying and entertaining. Several potentially interwoven stories flow through the book as S.T. investigates, samples and theorises his way around Boston harbour aboard his trusty zodiac inflatable speedboat.

There’s a lot of duct tape, spray paint and random hardware involved, plus trips to analytical labs to use high-tech gas chromatographs and the like. It’s a wonderful mixture of espionage, recklessness, braggadocio and science. Sometimes S.T. is so busy being paranoid and secretive that he misses the really obvious answers to his problems. Fortunately, the GEE has a wide variety of members and supporters who are able to offer help and advice to get his investigation back on track.

Neal Stephenson’s irreverent, anarchic prose pushes the plot along at a brisk pace, barely stopping for breath between explosions, toxic spills, dodgy lobsters and heavy-metal rock fans. There’s such a great cast of characters, too, and, even though many of them fall into various stereotype categories, none of the individuals seem like stereotypes.

The fat-cat executives have a lot of background to them, the Korean chef, lobster fishermen, Native Americans and ex-navy divers all have stories to tell and the environmentalists are so varied in their backgrounds and motivations that they do not appear as a mass of stock characters. All of their stories are interwoven to show how their lives are related to the big industry that is poisoning them.

This is a hugely entertaining novel. It is not at all my usual Science Fiction diet and, in some ways, it’s a shame that this book’s concepts are not Science Fiction. It would be nice to believe that in real life such tragic and systemic pollution could not possibly occur. It’s a book that is just as impactful and relevant today as when it was first published over thirty years ago. 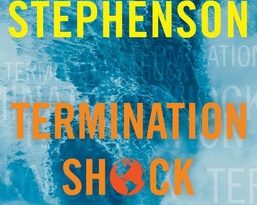 One thought on “Zodiac (The Eco-Thriller) by Neal Stephenson (book review).”