When the whole genre of fantasy took off, mostly due the success of Tolkien’s ‘Lord Of The Rings’, we were deluged by trilogies of quest novels set in low tech societies which used some kind of magic. Some were excellent but, as time passed, the originality deteriorated. While this kind of fantasy is still popular in some circles, others deserted for other fields.

Steampunk was an attempt to put the freshness back into the genre and consequently created a niche of its own, but it takes a special kind of writer to create a fantasy world that has the wow! factor. Brandon Sanderson achieved it in ‘The Way Of Kings’. Robert Jackson Bennett joins that elite group with ‘Foundryside’. 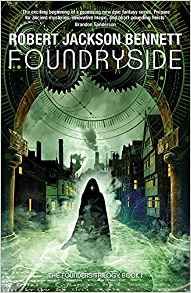 In this world, the Founders of the rival Houses of Tevanne have built their empires on the magic of scrivings. Individual symbols have the power to change reality but, individually, have no visible effect. Put together, like individual pieces of computer code, a single symbol can be used to represent a whole string of others. The influence of these is to make ordinary objects behave out of character by persuading them of a truth that is not real.

For example, a scrived crossbow bolt will be convinced that it is falling towards the Earth from thousands of feet up when it is actually going horizontally, thus increasing the damage it can do. A scrived coach doesn’t need horses because the wheels are persuaded that they are going downhill when they may actually be on an upslope. Scriving is the technology of this world. Only a few valued people are skilled at devising new codes and applying them. Life under the Houses, in vast enclaves called campos, is comfortable. There are, however, some people who for various reasons have to live outside the walls. One such district is called Foundryside.

Sancia lives in Foundryside. She is a thief and a very good one. The Houses employ people like her to steal secrets from the other Houses and increase their influence. Her skill comes from the fact that she can touch an object and get a total picture of it including its history, weaknesses and what is touching it. So a stone will give her the image of the wall it is part of. This talent comes from the fact that she was a slave who was experimented on, before she ran away, and now has a scrived plate implanted in her head.

As the novel opens, Sancia is in the process of a job. Her task is to steal an object from a safe in the Waterfront, an area which is heavily guarded. She uses scrived objects to help her. Though she succeeds, she inadvertently sets the whole Waterfront on fire, upsetting Gregor Dandolo, who is in charge of the Watch there and who is the son of the Founder of House Dandolo.

She has been told not to open the box she has been commissioned to steal but, as she has also been told to hang onto it for two days before delivering it to the client, curiosity gets the better of her. Inside the box, she finds an odd-looking key, scrived differently from most objects. When she touches it, she finds it talks to her. Not in the same way that she can hear normal scrived objects muttering to themselves but to actually hold a conversation. It calling itself Clef, seems to have a personality and can detect scrived objects from a distance as well as communicate with them but Sancia has to be in skin contact.

Now Sancia has not only the Watch hunting for her but also the client who appears to want the key without actually paying the promised fee. Her life is about to get much more complicated once she realises that the key is very ancient, coming from a time of the legendary hierophants, regarded in some quarters as god-like, and the scrivings on it could be the answer to vastly improving the current system. Everyone wants it and thus her.

Like most action novels, there are good guys and bad guys. Eventually, Sancia falls in with people she can trust. As the plot plays out, they are beset on all sides. Although some of the characters are ambiguous in their loyalties, some of the others seem to have lost any redeeming features they might once have had. Nevertheless, this is a thoroughly enjoyable romp and, even if it is possible to pick holes in some of the reasoning behind it, this is not important to the enjoyment of a very original fantasy and it isn’t a quest, it is fight for survival. 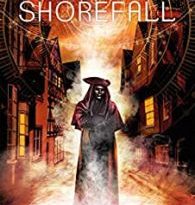