To many, the term ‘fantasy’ means either an invented world where the technology level is mediaeval, the highest form being the forging of steel, or a contemporary setting peopled with supernatural creatures like vampires and werewolves. True, a lot of fantasy can be encompassed by variations on these themes but sometimes the imagination of the writer can veer off at an oblique angle. Then there is the chance that something new and fresh will emerge. In his ‘Founders Trilogy’, Robert Jackson Bennett has done just that. 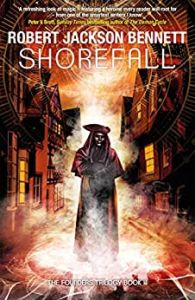 ‘Shorefall’ is the second book of the proposed trilogy. The previous book, ‘Foundryside’, introduced a world where the tech is a magical system operated by a complex code of numbers and symbols. The master-codes are held in huge structures called lexicons. The codes are scrived onto objects and change their properties. The scrived object almost becomes alive. A wheel will be convinced that it is on a slope and that it has to go in the direction of gravity even if the reality is taking it uphill. To a degree the scrivings are computer code. The Founder families of the city of Trevanne used to have a monopoly on scriving technology, living in huge campos, their employees enjoying pleasant surroundings and circumstances. Outside, the campo walls in the province of the poor and criminal.

In ‘Foundryside’, we were introduced to Sancia, a scrived human. They are actually illegal but the unscrupulous try to do it anyway. Usually it doesn’t work. Sancia is a thief with the advantage of being to hear the mutterings of scrived objects. When she stole an object that had a personality called Clef, it lead to the destruction of one of the campos of a Founder family and averted a bigger disaster than she actually caused.

‘Shorefall’ begins three years later. Sancia and her friends have set up a foundry based on altruism. They think it unfair that all the power is in the hands of the few. One of the problems is that the scrived objects have to be within a certain range of a lexicon to work and the size of these makes them non-portable. Orso and Beatrice, the scrivers of the team, have developed a method of convincing an empty box that it contains a working lexicon.

The idea is to give this technology to one of the Founding families but, while Orso is delivering the device, Sancia is using her thieving skills to plant a device that will send all the information from the main lexicon to their base. In other words, they are hacking the system. They intend to feed the information to the start-up foundries. This is just an exciting, adventurous start to a novel which quickly becomes more complex and darker.

The art of scriving did not develop within the current civilisation. It was resurrected from artefacts from the past. Clef and Valeria were created in the distant past as objects which had personalities downloaded onto them. Both of them have been able to communicate with Sancia and Valeria has altered the scrivings on the plate embedded in her head to make them more effective. Clef, though, has been silent for the past three years and Sancia wants her friend back. Valeria warns them that something bad is coming. Crasedes, the man who created both Clef and Valeria, is supposed to have been dead for thousands of years yet he is now returning.

However, Crasedes has always played a very long game and the find of a finger bone has enabled Ofelia Dandolo to scrive it so that it believes it is a whole body complete with memories and intelligence. Unfortunately, Crasedes intentions towards the city are not what Ofelia thinks. Somehow, Sancia and her friends have to find a way to thwart the ambitions of both Ofelia and Crasedes.

The characters in this series are engaging. They face almost impossible odds and don’t always succeed in their aims. The tech/magical system is intriguing, especially when Sancia argues with a device to go against it programming. It is probably better to begin with ‘Foundryside’ to understand all the nuances of the civilisation but this series must be one of the best fantasies around at the moment. 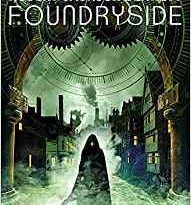