‘After The Orange’ features twenty-four stories by a variety of writers contemplating the future of America and the world after 2032 or further ahead. The basic premise is that the current leader of the free world will make changes that have long-lasting effects. In the foreword, Elizabeth Ann Scarborough quotes an anthropologist discussing places and times where extremists take over: ‘Moderates are always the first to be killed.’ 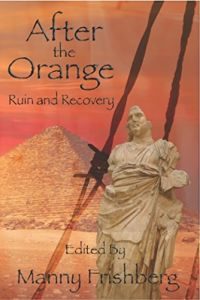 The collection begins with ‘The Business Of Government’ by William Burns, a short poem about the effects of running government like a business, a philosophy praised by many. Even Robert Heinlein, nobody’s idea of a soft liberal, thought this was silly and pointed out, using Wyoming Knott in ‘The Moon Is A Harsh Mistress’ that the aims of government and business are completely different.

The first story is ‘Bad Memories, 2032’ by K.G. Anderson, a short bitter piece about you-know-who opening his Presidential Library. I understand the bitterness but that’s what you get when a reality TV star becomes President. Next up, reality TV stars becoming President is taken to its logical conclusion in ‘Candidate Games’ by Laura Staley. Those seeking the White House appear on television game shows eating live beetles on a stick and trying to grin. ‘Think of these bugs as terrorists, and my jaws as American military might.’ It might come to this. Here’s effective black humour with the female protagonist Leslie facing a tough decision at the end.

‘Baby’s Gonna Vote’ by Marcelle Thiebaux has a baby in the lead role. Carefully avoiding a beating by Mommydaddy, he watches the ‘Today’ program to see which strong man will be the next ‘tough-guy cutie Potus.’ There’s a lot of satire squeezed into this small story. Not so funny is ‘Introductory Remarks At The Institute Of Probabilistic Computing’ Samantha Weiss. A speaker from the Institute addresses a load of poor people who had no choice but to attend. It’s a test. They will be presented with a series of statements and their responses will be measured. Then they will be persuaded that the statements are true and they are wrong. This is chilling.

Conscripting people into the armed forces is unconstitutional. Heinlein said so and he was mad for the military. In the good old days of conscription for the American Civil War, there were riots in New York when it became known that rich folks could buy their way out of military service by paying a few hundred dollars. In ‘Jailbird’ by Darren Todd one Devon Finch, a nice man with a wife and child, can’t get a job so works as a Jailbird, doing time for rich folks who have committed a criminal offence and are allowed to pay someone else to do the time. Mostly the prisons are reasonably comfortable and the money isn’t much. Then he gets an offer he can’t refuse. This scenario struck me as entirely plausible in a country designed for the rich.

I really liked ‘Garbage Patch Kids’ by Chris Bullard. It’s done in the style of a leaflet that begins ‘Welcome to Plasticia, the multi-hued gem of the Pacific Ocean.’ Plasticia began as a scientific research station when it was discovered that waste plastic in the ocean could be fused together to make a sort of platform.

In fact, there was a news story about this the other day. The research station expanded when it took in refugees from the desert wastes and the flooded cities. Luckily, there was plenty of plastic to keep building. This is full of interesting details about everyday life in a city built of plastic rubbish floating on a dangerous ocean in a hot world. Plasticia: it’s not a nice place to visit and you definitely wouldn’t want to live there. Your grandchildren might have no choice.

The ‘American Angel’ of Kara Dalkey’s story is Lorellei Smithson, a beautiful businesswoman and Republican candidate for President. She has a plain folks manner but is actually a rich heiress and she promises the voters jobs. Her beauty products company is opening new factories in all the swing states. This is a great satire on the effects of mixing politics and business. I have never understood why politicians boast about how they will take care of business. In my experience, businesses are quite capable of looking after themselves.

‘SIXTY-EIGHT’ by Frog and Esther Jones has secret agent Dana Lui rescuing a new kind of President-Elect. This starts as an adventure yarn then turns into a political debate as she is lectured by the masterful kidnapper, a man as smooth as a Bond villain in the first reel. This takes a proper science fictional approach to the future with new technologies involved as well as politics.

Stormy Sommers is an ambitious girl in ‘One Drop Stop’ Yong Takahashi. Dissatisfied with small-town life as Ria Mae Miller she got a job as an assistant on a radio show. They let her read the weather and traffic. ‘Her super-charged personality, low-cut sweaters and ability to blow the station manager on demand’ got her on The Morning Show. Her talk of nostalgia and family values made her popular. When she pals up with a popular politician and comes up with a test to weed out ‘undesirables’, her rise seems unstoppable. I enjoyed the satire but I’m not sure the ‘test’ works.

Tamara is dissatisfied with the New Republic of America in ‘A New Republic’ by Hannah Trusty. Everyone has a similar house, a similar medium-size car and people are appointed careers according to their talents. Her son, Nick, is musically inclined but there are enough musicians and he has an aptitude for mechanical work so that’s his life sorted. The tone makes it clear that the writer disapproves of this society but is it really so bad? Everyone’s fed and housed. In our current system, most people hate their jobs anyway and the majority of would-be artists struggle along at some routine job and fail to make the big time. The story provokes thought about what kind of society we want and how much freedom we will give up for security.

It’s the eve of Trump Memorial Weekend and senior staff member Roy Burton has been called out in the wee small hours for a crisis at Truth Department. Dave is the only junior on duty. In ‘True Values’, Ben Howels supposes a future in which the news is totally under the control of the state. Clearly, this is meant to echo The Ministry of Truth in Orwell’s ‘1984’. The crisis worsens until… This was another one of my favourites.

‘The Last Flight Of Captain Kittredge’ by John A. Pitts is about a group of survivors on an airfield near Seattle in a post-Apocalyptic disunited states of America. The disaster was caused by the Waste that strikes adults only and is a form of cancer ‘augmented by human meddling and bio-engineering that rots your body in days’. Some survive but became feral hunters. When a planeload of desperate people wants to land in their safe haven, young Tanner Carson and his friends have a difficult decision. The Orange wasn’t directly involved in this but it’s a decent Dystopian yarn with good characters.

‘Sunday With Javier And Papi’ by Charles Joseph Albert opens with a confusing scene of church bells, drone engines, fracking derricks, smog, skiffs, barges and robot labourers. Papi is Javier’s great-grandfather and they are on their way to compulsory nine o’clock mass. Papi remembers the good old days but Javier thinks he talks rubbish. Nice future slice of life.

‘Dawn Of The Debt’ is a wonderful piece of black humour by Kevin David Anderson. In the future, death is no excuse to evade one’s financial obligations. If no one pays your debt you are re-animated and sent to work long days in a camp at minimum wage until it’s paid off with interest. The debt collector isn’t a nice man but people like this exist. One to make you shudder.

Holden and Rome, two young lads, go into the forest to catch something that can make your dreams come true. ‘Dreamer’ by Andrea Lopez is more of a fantasy, it seems than future SF though there are bitter references to the Normoids who ruined the old world. Another fantasy is ‘Glow In The Dark Girlfriend’ by Bo Balder. Stanmay leaves work late in post-Apocalypse Manhattan and her route home takes her through dangerous areas. Chased by a gang, she finds shelter in the elf enclave ‘Laurelindorinan’. One of her ex-boyfriends turned elf and moved in there. They give her a good welcome and throw a party but elves are not kind. This has ‘adult’ scenes but was a powerful story.

Torture is all the rage in fiction now, especially film and television, and features in ‘Studies In Shadow And Light’ by Su J. Sokol. Sasha has foolishly gone to study in the United States of America, despite its restrictions on immigrants. She is tortured by Mister Smith under wide powers allowed by the state. However, this was not gratuitous suffering and the ending justified the meanness.

Deadly with black hair and black eyes, Susan has been given the nickname Tarantula by her peers. Her left eye has an x-ray mode and she’s equipped with sensors and most of her skeleton is metal. ‘Tarantula’ by Russell Hemmell is a tale of hunting rebels, presumably in a future USA. Even a bionic woman has feelings.

There’s a long section about the contributors to close the book, which I like. It’s nice to look up the authors whose stories you enjoyed and find that they live in Utah with four cats and a Norwegian Blue Parrot or whatever. It also gives them a chance to advertise their websites and other books which, if you liked their writing, you might want to check out. It’s hard to get noticed with a short story and this section boosts their chances.

Overall, I was impressed with ‘After The Orange’ and hugely impressed with several of the stories. If you’re a Science Fiction fan interested in politics then this is definitely worth reading. Even if you’re apolitical it has enough pure entertainment in it to give value. Sadly, if you’re an American liberal these stories might be hard to take so you’ll have to treat them like someone else’s good poker hand. Read ‘em and weep.