As can be seen from the title, ‘Evolving: The Human Effect And Why It Matters’, Daniel J. Fairbanks’ book is about evolution with a special concentration on Man and how he spread across this planet. This book strongly hits the creationists and those who believe in the so-called ‘intelligent design’ with proof of evolution but as I’ve commented before, they are the kind of people least likely to buy such books as this. However, if you want the ammunition to hit them between the eyes with their flawed logic, then this is a good book to add to your collection. Where ‘intelligent design’ is concerned, if whoever the creator is was that clever why do people get cancer? If you were making people, wouldn’t you ensure that that didn’t happen? Is there anything new here for your ammunition? Well, yes. Evolution was thought of before Darwin but what makes him significant was establishing the proof from the Galápagos Islands with the finches that lived there and being able to trace their divergence. An odd point is that both Dawrin and the father of genetics, Gregor Mendel, were alive at the same time although Fairbanks misses the point that both didn’t release their results much later in their lives and certain the monk was never revered in his own lifetime.

As you probably already know, Homo sapiens is only one of many species of Man but I wish Fairbanks had explored a little more about what happened to the ten foot tall hominid from China, Gigantopithecus, from an evolutionary point of view. I mean, what were the benefits of such a size and why did they die out rather than evolve into a smaller size, as what happens with other species as they must have found a food crisis at some point.

The key point to hit the creationists with is that we are not evolved from the great apes but just close relatives who became smarter. Following the pattern of evolution, early Man was very nomadic moving to where the most food existed. Being a biped no doubt helped in this because Man didn’t have to rely on the forests to move around in.

Seeing the analysis of DNA differences between Man and the apes is enlightening and Fairbanks explains, together with diagrams, as to how it makes us what we are. On top of that, how infections can cross species and how fragile Man is to such infections as witnessed by Aids and HIV. The fact that our understanding of the Human Genome means that certain genetic diseases like Huntington’s can be remedied should reassure a lot of people. Considering so many problems affect the immune system means further strides will be made.

What is more important is that evolution is still going on about us and Fairbanks gives examples of this and how Man has messed this up by introducing the wrong species to remedy a problem. Some of this you are aware of but here he focuses on limiting cereal crops to only a few species which has made them more susceptible to disease and being wiped out. This section alone should be a warning call to all that diversity enhances survival. Limiting, whether plant or animal, depends more on the dominant species wiping out the rest which must surely damage the ecology of the planet.

Something that I hadn’t been aware of is that with corn, without Man’s aid, can’t be spread around to grow again. In other words, if we died out, then so would corn. I remember reading about seed banks being kept in the Antarctic but wasn’t aware that it was first started in the USSR and nearly came to an end during Stalin’s scourges.

Fairbanks also points at www.pamd.uscourts.gov/kitzmiller/kitzmiller_342.pdf as a useful link about a decision made by Judge John E. Jones III where ‘intelligent design’ shouldn’t be taught in American schools. When you bear in mind that 40% of Americans in an advance country believe in it and religion more than evolution, is it any wonder that the rest of the world can see it being dragged down by such thoughts. Oddly and even contradictory, key religions see nothing wrong with evolution. This is one area where people have to be convinced they are wrong by virtue of proof because belief alone isn’t enough. Evolution isn’t theory but viable proof. Oddly, it’s encountering its own survival of the fittest and there’s not enough being done to convince these people otherwise.

This is a nicely laid out book explaining everything. Occasionally with genetics, it has to become a little more technical and about the only proof I would have liked to have seen here is Mendel’s pea cross-generations to show the percentages. Evidence of this convinced me when young and would have been welcome ammo to show those who don’t understand evolution. Read and evolve. 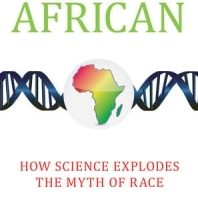 Everyone Is African by Daniel J. Fairbanks (book review).

Everyone Is African by Daniel J. Fairbanks (book review).