Belated sequel to ‘Ecotastrophe’, issued by Sam’s Dot Publishing over a decade ago, ‘Ecotastrophe II’ is another anthology of climate change stories. Some are set in the near future where things look bleak and some are set in a far future where we’ve coped with the crisis. All of them accept climate change as a fact that will shape our future which, given the weather lately, seems likely. After an introduction by editor J Alan Erwine, the opening story is ‘Gyroscope’ by Tyree Campbell. Marcus Barrow, CEO of the billion dollar CommEarth Corporation, goes on a hunting trip with some friends and his son, Paul, our protagonist. The helicopter crashes and they have to cope with life in the wild. Paul soon finds out that all is not what it seems. The air of suspense is maintained nicely, the denouement makes sense and there‘s a story of young love thrown in for good measure. I think Campbell’s forecasts on how long we have to correct climate change are optimistic but I might be wrong.

‘Kale’ by Dan Rice is set in a future where water is rationed and having a vegetable garden is forbidden. Theo’s father has one and the school bully suspects it and threatens to expose him. At least teenage growing pains will not be altered by climate change. Solid Science Fiction where exposition of the society is done through story. I liked it.

You would expect ‘The Last Polar Bear’ to go in a certain direction, especially with that cute one on the cover, but author Melanie Rees throws you a curve with unexpected plot twists it would be ungentlemanly to reveal. Two lads go off into the wilderness to photograph wildlife, laughed at by the helicopter pilot who drops them off for their talk of polar bears. This was an enjoyable romp through B-movie land.

We move to the far future, long after the climate catastrophe in ‘The Perisphere Solution’ by Robert J. Mendenhall. Humanity now lives in large sphere cities with many levels. Towering farm factories just outside the sphere provide food and life is comfortable. Special Agent Markon is a federal agent and therefore an object of mistrust to city officials in North Am City 4-17 when he shows up on a mission. A good concept and a solid adventure story were slightly spoiled by the story stopping short suddenly, which I found disappointing because I was enjoying it so much. Everything was explained, though.

There’s a second story from Tyree Campbell. ‘Kia Manawanui’ is a near future tale of an intelligent woman doing her bit to save the planet. Victoria Elizabeth Chambers, known as Kiwi to her colleagues, is a roving PR person and fundraiser for Ecotect, a large charity. After an interesting teaching session with primary school children, whereby the reader is also made wiser or at least better informed, she pays a visit to the charity’s headquarters. We have few taboos nowadays but Campbell kicks one sacred cow here and it’s one that needs a damn good kicking.

The world is underwater in ‘The Wrong Kind Of Ship’ by Gustavo Bondoni which postulates a future in which some live in well-organised cities beneath the waves and some float around in submarines. The latter are the ‘Untouchables’ and the two groups have little to do with each other. Then, aliens crash-land and send out a distress signal. As the city dwellers and the submariners co-operate to mount a rescue our protagonist, Aldo, learns that there is more to life than staying safe. Good characters a solid plot and interesting aliens make this well worth reading.

In ‘Pelagus’, by Mike Adamson, it’s been raining for forty years. Drift Station Pelagus was built just before the Earth became uninhabitable. Three generations later, it’s trapped in the Oceanic gyre or spiral and has only occasional contact with cities at L5. Kira Lytton is a mathematician with a plan to get them out of the gyre so they can move the station to better climes. This had a lot of science at its root and was full of detail. Somehow it was dense, compact and readable all at once. You can tell a lot of work went into it.

A jolly good read, all in all. We don’t know for sure what kind of Ecotastrophe we’re headed for or when, but most scientists agree the future doesn’t look bright for planet Earth. Can we escape to the rest of the solar system? Nomadic Delirium Press also publishes a regular annual anthology ‘The Martian Wave’ about space exploration which might be more optimistic. I must check it out. 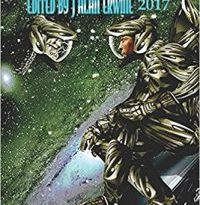