It is 1986 and Snowcap, the Antarctic military communication base, is observing an orbital flight when a certain blue…er…shed arrives and the capture of its three visitors, the Doctor (actor William Hartnell), Polly (actress Anneke Wills) and Ben (actor Michael Craze). Although we don’t see the size of the base, we do know that General Cutler (actor Robert Beatty) is in charge and the civilian scientists there jump to his orders as well. The appearance of a mirror image planet arriving in near orbit puts the space flight in jeopardy and upsetting the Earth, compounded by the arrival of a squad of cybermen who wipe out a military team investigating the…er…shed and take over the base. It is only the sharp thinking of Ben, when isolated, that they are vanquished. However, not soon enough. The spaceship is lost and the rescue spaceship sent to rescue it is flown by Cutler’s son who volunteered. Just to make things even more difficult, the radar detects more cybermen spaceships arriving. Cutler attempts to get permission the use the Zenith doomsday bomb but is refused by his political boss in Geneva although interprets stopping the cybermen in any way permission enough. The Doctor is unable to help, having collapsed. Ben’s protests ends up having him locked up as well but Polly by offering to be the coffee lady convinces Barclay (actor David Dodimead) that the Doctor’s option that Mondas, the cybermen name for their planet, will burn up from absorbing too much energy should be allowed. Barclay guides Ben into what needs to be done to sabotage the missile and uses the ventilation shafts to do so.

Unfortunately, Ben is caught by Cutler, is stunned and faces execution as the missile is about to launch. When it fails, Cutler is killed by another team of cybermen who now want to use the bomb to destroy the Earth. Ben joins the scientists in the missile silo to reactivate it and figures out why they must do it and not the more advanced cybermen because they have a weakness to radiation. Meanwhile, Polly and the Doctor are kept prisoner on the cybermen spaceship and then something happens to Mondas and a bigger change to the Doctor. You’ll have to buy this DVD to find out what happens next although as ‘The Tenth Planet’ is legendary, this should be general knowledge to ‘Who’ fans.

I do have to say that even with what I know now and what Kit Pedler certainly must have known back in the late 60s, taking control rods from Snowcap’s nuclear reactor might have contained enough radiation to affect the cybermen but would also have allowed the reactor to reach critical mass and create its own problems. Maybe they were lucky and that the reactor wasn’t down long enough or Barclay had powered it down sufficiently before taking those rods out. Saying that, it wouldn’t just have been the lack of lights but even with the insulation of snow keeping the heat in, it wouldn’t have been long before the temperature dropped to deadly effect.

As we all know, ‘The Tenth Planet’ was amongst the episodes found recently that was believed completing missing. We are still deprived of the fourth episode and this is replaced by an animation version. Considering we have actually footage of the actual regeneration, I did wonder why it wasn’t switched to that at the end because it wouldn’t have changed the episode that much, although there are sample clips throughout showing this happening.

As much as it was interesting to see this story again, William Hartnell doesn’t really do very much and it is Michael Craze as Ben who carries the story. The half an hour extra on the DVD has Anneke Wills explaining how Hartnell had succumbed to pneumonia and had to be written out for the end of episode two and three while he recovered. In many respects, I wish Patrick Troughton’s first story, ‘The Power Of The Daleks’ had been found too because it would have been his first significant story, although there are minute clips of it in the extras. The audio commentary is restricted to the first three live episodes with various actors from the story, Anneke Wills, Christopher Matthews, Earl Cameron, Alan White, Donald van der Maaten (aka Gregg Palmer) and Christopher Durham with a separate interview with designer Peter Kindred, all conducted by Toby Hadoke.

There is viewing of episode four with photographs and about ninety seconds of footage and dialogue so you do see the actual live regeneration although really and from the explanation from the extra, what is described is very much the same as what is used for the TARDIS materialisation/dematerialisation to regenerate from Hartnell to Troughton.

On the second DVD, there is a repeat of an interview with William Hartnell and his views on pantomime compared to ‘serious’ acting. He really must have seen it as a bit of downgrade doing it, forgetting that the kids were coming to actually see him act.

The quarter of an hour with Anneke Wills is probably the only place you would see an interview because, as she points out, most of her stories in the Patrick Troughton era were wiped by the BBC but does give insight into these stories and the odd still.

An examination of what makes the Golden Age of ‘Doctor Who’ by Dominic Sandbrook neglects the fact that, as I’ve reviewed in recent seasons, is that there’s been too many poor episodes of late that could have been helped had they had a lot more work at the scripting stage.

With ‘Boys! Boys! Boys!’, three male companions from across the decades, Peter Purves, Frazer Hines and Mark Strictson discuss their roles and how they got them and what happened afterwards which is quite revealing. Something I do remember about Purves with ‘Blue Peter’ was his introduction as a swimming instructor before becoming one of the hosts.

Another twenty-five minutes has ‘Companion Pieces’ with chat from companions from across the decades as to their purpose. Following, this nine minutes from ‘Blue Peter’ about ‘Doctor Who’s tenth anniversary.

It was interesting seeing ‘The Tenth Planet’ again after all these years and it does really hold up pretty well with the BBC’s limited resources and problems. If ever there was a demonstration of actors taking on lines seamlessly, then episode three is it. This is so seamless that when I saw it originally back in 1966, you just took it for granted that was the way things were. This release has more than enough extras to make it an added bonus to add to your collection. 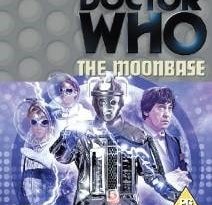 Doctor Who: The Moonbase by Kit Pedler (DVD review).

Doctor Who: The Moonbase by Kit Pedler (DVD review).