The year is 2070 and the TARDIS materialises on the Moon instead of Mars. Donning spacesuits and sunglasses, the Doctor (actor Patrick Troughton), Ben (actor Michael Craze), Polly (actress Anneke Wills) and Jamie (actor Frazer Hines) go out to explore and get carried away with the sixth gravity when they arrive on ‘The Moonbase’. An interesting side note that although not stated, the TARDIS must confine air to its immediate area because they don’t use an air lock when leaving through the blue door. Unfortunately, Jamie gets a concussion when he collides with the building and is taken inside. The others follow and discover a weather station that has a Gravitron, a gravity device which is used to control the Earth’s weather. Its staff are systematically being rendered unconscious by an infection that leaves black veins on their faces and hands, including their own doctor. The Doctor offers his services which are reluctantly accepted but they also fall under suspicion when the infected are systematically kidnapped although Polly recognises who, a Cyberman! Convincing the Moonbase crew of that is difficult because they all knew they were killed off some decades back. I wonder what they would have thought had they known these strangers were instrumental in doing that?

When the small team of Cybermen take over the base using the previously kidnapped mind-controlled scientists to control the Gravitron, their mission to destroy the Earth is clear. With the Doctor kept with the scientists in the control centre, it is Polly and Ben who come up with a mixed solvent to attack the Cybermen, with a recovering Jamie helping as well. The success of that only makes other Cybermen nearby determined to complete the task and, finally, it is the Doctor who finds the way to do that. Whether or not they survive being thrown into space is never revealed.

With the second and fourth of ‘The Moonbase’ episodes now rediscovered, the first and third were reconstructed with animation. In some respects, this animation takes advantage of how things were filmed back then with an emphasis on animated close-up and eye expressions rather than too much movement unless it counted, no doubt to keen within a tight budget. The grey tones worked well with the Cybermen and Polly never looked prettier.

Oddly, there is very little in the way of extras. The usual photos and an extraordinary half an hour chat with Anneke Wills, Frazer Hines and Reg Whitehead (the lead Cyberman) about the story. The audio commentary is with Wills, Hines, actor Edward Philips and sound effects man Brian Hodgson refereed by Toby Hadoke but only for the live episodes. As it’s unlikely that the missing episodes will ever be found, it seems a shame that commentary wasn’t used there.

Watching it so soon after ‘The Tenth Planet’, I couldn’t help but be drawn to some similarities between them, especially as written by the same author, Kit Pedler. After all, both are confined bases, both are attacked by Cybermen and the same companions find the way to stop the menace although with the latter, it is the Doctor who finally resolves the affair. For Polly and Ben, it could have looked like they learnt from the first time around. Polly still screams but comes up with the chemical solution although with my knowledge of chemistry now, I’m surprised the plastic aerosols didn’t melt before spraying them. Polly also seems rather knowledgeable in chemistry for a go-go girl background.

The Cybermen now have their more familiar helmet look and menace. Saying that, one has to wonder at why they chose the option of only two fingers and a thumb on each hand instead of the five they had originally. After all, the reason why we’ve kept out four fingers and thumb is because of the added dexterity and holding things, important when building anything. This version of the Cybermen, who depend so much on their technology, would have immense problems and I suspect when they couldn’t readily repair their laser device returned to the more traditional four fingers and a thumb design in a refit. Likewise, their vulnerability to solvents through their front, for the want of a better name, assembly shows a serious design flaw on their part. If it is used to draw in oxygen, considering that the only organic left is the brain, it would hardly need that massive a supply of air to oxygenate its fluid.

Whatever else, ‘The Tenth Planet’ introduced the Cybermen but it is ‘The Moonbase’ that reminded everyone that they could be as formidable as the Daleks and very smart as sustained through their history since. I really would love to see the return of the Mondas bunch to kick the recent version for not being scary enough. As Frazer Hines points out in the extra, these Cybermen could creep up on you, the new ones you could hear coming from a mile away. 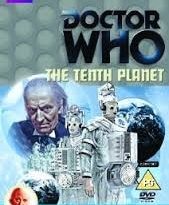 Doctor Who: The Tenth Planet by Kit Pedler (DVD review).

Doctor Who: The Tenth Planet by Kit Pedler (DVD review).