This week ‘Doctor Who’ went ‘Into the Dalek’. If you’d like to read a spoiler-free review of the episode then please follow this link (http://sfcrowsnest.info/doctor-who-into-the-dalek-by-steven-moffat-and-phil-ford-tv-review/) to Geoff’s excellent piece. If you’re happy to be spoiled, whether you’ve seen the episode or not, then read on…

When does ‘Doctor Who’ start repeating itself? Insert your favourite ‘Five Faces Of Doctor Who’ gag here. ‘Into The Dalek’ felt very familiar indeed and there are good and bad reasons for that. Taken on its own merit, I believe the episode works very successfully, however those with longer memories may feel we’ve been here before.

Written by Phil Ford and Steven Moffat, ‘Into The Dalek’ explores the nature of whether you can have a good Dalek, a genuinely good one rather than a manipulative and devious one that pretends as in ‘Power Of The Daleks’, ‘Dalek’ or ‘Victory Of The Daleks’. The story is set on the Aristotle Space Hospital, now converted into a military staging post for the Combined Galactic Resistance, who are engaged in space battles between their own Wasp Fighters and Dalek saucers. So far, so ‘Space: Above And Beyond’, however when the Resistance bring a Dalek on board that possesses homicidal tendencies towards its own race, the Resistance realise they need help. Luckily for them, the Doctor arrives, having saved soldier Journey Blue from the Daleks. Presumably, this is the Doctor trying to correct some of his ‘past mistakes’. Thus the stage is set for the Doctor, Clara and Journey to become miniaturised and travel into the Dalek itself.

The first thing to say about ‘Into The Dalek’ is once again how well Ben Wheatley’s visual flourishes work. The Aristotle set looks quite slight, but he’s able to squeeze some good walk-and-talk corridor shots out of it, brightly lit to compare with the dank, inner workings of the Dalek. The moment that the Doctor and Clara enter through the eyestalk is shot like the opening to the first Cushing movie meets ‘The Cabinet Of Dr Caligari’ as Capaldi’s stretched profile reaches across a blue, swirling, misty void. Similarly striking is Capaldi’s conversation with the Dalek in which he shows the Dalek the beauty of the universe. The fourth wall is completely exterminated as the Doctor talks to the Dalek/Us. They might consider some 12th Doctor relaxation tapes in future. It is powerfully done. Less relaxing are the deaths of humans and Daleks, shot, in both senses in slow-motion. Rarely have Daleks exploded as beautifully as they do here.

The soldiers in the episode provide a little more to the story than just cannon-fodder. Journey Blue, a resistance soldier whose uncle is also her commanding officer, is a dedicated Dalek fighter ready to risk her own life for the cause. This is contrasted with new character Danny Pink, an ex-soldier whose combat experience makes him ideal material for teaching at an East London comprehensive. Danny is clearly still dealing with whatever it is he’s done in the past as evidenced by him shedding a tear in front of his class when questioned about his soldiering days. This shows the audience that he is a sensitive soul, it arguably shows his class he’s a soft-touch ripe for exploitation. He’s also Clara’s new love interest. She’s not sure at first, questioning why Pink would set up the ‘Coal Hill Cadet Force’ a sort of after-school army club, the sort Turlough refused to join in ‘Mawdryn Undead’. We know Clara’s a liberal sort because she brandishes ‘The Guardian’ where everyone can see it. She finds Danny awkwardly charming and him bashing his head against a desk when first denying Clara a date is quite cute. It is Clara’s experiences with the brave soldiers inside the Dalek, mainly the bravery of Gretchen Alison Carlisle, that convinces her otherwise. Incidentally Carlisle’s whole ‘Do something amazing and name it after me’ speech seems to have accidentally travelled forward in time from the Russell T Davies era. The Doctor’s attitude to soldiers is a little more puzzling. He’s been a soldier, his best friend on Earth, the Brigadier, was a soldier. Why then the refusal to take journey with him on account of her job? Does he recognise in her the same murderous intent that he reawakened in the good Dalek? Perhaps, more likely he was just wary of someone who chose to wave a gun in his face the first time they met. Blue and Pink, both are being compared for a reason. If Pink gets involved with the Doctor he may suddenly find himself being a soldier once more.

The other obvious comparisons for ‘Into The Dalek’ are other ‘Doctor Who’ stories, namely Rob Shearman’s ‘Dalek’ (2005) and Bob Baker and Dave Martin’s ‘The Invisible Enemy’ (1977). The story steals its captured, injured Dalek and the Dalek/Doctor comparisons from the new series story, even down to paraphrasing the Dalek’s killer, ‘You would make a good Dalek’ line that rendered the Ninth Doctor speechless. It’s ‘Fantastic Voyage’ miniaturisation scheme comes from the Tom Baker story, sadly K9 does not appear. The difference here is that the Doctor gives the idea of a good Dalek a try, he believes it backfires, restoring his old prejudices, but then learns from Clara that he’s wrong. Just imagine being in one of Clara’s classes, ‘IS that what we LEARNED today?!’ ‘I don’t know, Miss, stop picking on me!’ It is however the Doctor’s own complete opposition to the Daleks, as beautifully described by Capaldi, ‘Then I went to Skaro…’ that turns the creature homicidal (Dalekcidal?) once more. This reusing of ideas from the Eccleston story though begs the question, has the show run out of ideas?, especially since last week was a direct sequel and lift from ‘The Girl In The Fireplace’.

I would say that while the ‘Good Dalek’ line was a little too obvious a lift, there’s nothing wrong, thematically speaking, with the idea of reconditioning imprisoned Daleks. Consider also that ‘Doctor Who’ has always recycled. It has been nine years since ‘Dalek’ was premiered. There was also nine years between ‘Planet Of Giants’ and ‘Carnival Of Monsters’, both of which feature the Doctor and companions getting miniaturised. Why ignore good, fun ideas? Meanwhile the reference-o-meter continued to tick over. I counted ‘Resurrection Of The Daleks’, ‘The TV Movie’ and ‘Star Wars: A New Hope’ if you like characters escaping down chutes into gunk and then appearing completely bone dry two minutes later.

Overall, then I think it would be easy to count ‘Into The Dalek’ as a quick remake of two other stories, but I think that devalues it. There’s a neat duality at work between the Doctor and his greatest enemies and this story examines it well or at least as well as it can in 45 minutes, it did feel rushed compared to ‘Deep Breath’. Jenna Coleman continues to be excellent and proving herself a brilliant foil to Capaldi’s irascible, sometimes brutal Doctor. You can make a good case for him murdering Ross, too, despite his assertion that he was saving the rest of the team’s lives. The series continues strongly, withstands multiple viewings and remains intriguing.

Oh and where did Missy’s Scottish accent go?

Doctor Who: Into the Dalek: www.bbc.co.uk/iplayer/episode/b04grqgx/doctor-who-series-8-2-into-the-dalek

Doctor Who series 12 to return 2020 with Jodie Whittaker.

Time(lord) of the rings… Matt Smith and Jenna-Louise Coleman interviewed. 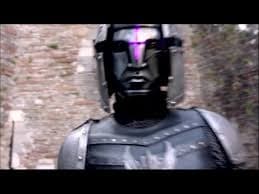 Doctor Who: Robot Of Sherwood by Mark Gattis (TV review).

One thought on “Doctor Who: Into The Dalek – The Spoiler Review by John Rivers (TV review).”