For those who don’t know, ‘DefCon 4’ is, apart from the name of this film and the name for a reaction in the event of a world-war nuclear war. Although written as ‘Def-Con 4’, the title in the film has no hyphen, so I shall refer to it as that.

The Nemesis Mission is a NORAD nuclear armed three crew space station who finds observing an nuclear war on Earth and have to take action and send in their own nukes. The crew are Walker (actor John Walsch), Cecil Howe (actor Tim Choate) and medic Eva Jordan (actress Kate Lynch). The high radiation count precludes them returning to Earth, despite Howe wanting to rescue his wife. However, when one of their nukes goes rogue in space they are forced to land, although Jordan suffers a concussion and is unconscious. 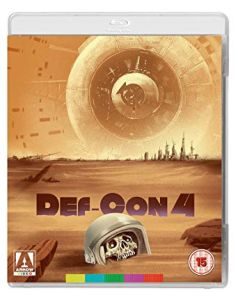 Their capsule is embedded in the ground and when they hear noises outside, attempt to dig their way out, except Walked is grabbed and his bitten-off hand returned. Howe leaves a recorded message for Jordan and ventures out at night, hoping the darkness conceals what he is doing and findng out what is going on. It doesn’t and he is captured by silent hunter, Vinny (actor Maury Chaykin). What no one knows is that there is a rogue nuclear bomb attached to the capsule and it’s on a two day timer to go off.

Howe is captured and taken for breakfast, albeit tied up, and discovers Vinny is keeping a woman, JJ (actress Lenore Zann), in a basement dungeon. His attempts to trade some of their three months of suppiles for a weapon or boat with little avail. When Vinny rushes off to stave off an ambush, the woman sneaks out of her dungeon and Howe tried to convince her set him free. More so when she reveals she knows where a boat is. Alas Vinny returns and plans to kill Howe. However, Howe persuades with a promise of supplies and all three of them got to the beach and captured by another clan, led by Gideon Hayes (actor Kevin King) who have already got the capsule. He also has a lot of prisoners.

He is locked up with JJ and the recovered Jordan in the next cell. Gideon’s computer expert Boomer (actor Alan MacGillvray) is as much a prisoner as they are. He is forced to give the location of the remaining survival stations. For the four people, they are sentenced to be hung. Beyond here is spoiler.

For a low-budget SF film, ‘DefCon 4’ is actually a nail-gripper, even for its original 1985 release. It isn’t preachy about the results of a nuclear Armageddon, just the cold reality of survival. Literally, he who has the guns fires the shots. Quite how Gideon Haynes stayed in control so long is something I’ll leave you to survive. Just shows how ruthlessness and personality conviction can do things. Nothing changes in that regard.

Actor Tim Choate is also in one of his rare film appearances and if you were ever curious as to what he looked like under the Zathros make-up in ‘Babylon 5’, then this is an ideal opportunity. What is curious is that he is the end of the opening cast credits when in fact he is the star of the film. Maybe it was done that way so you would have to guess who survives but not by their prominence.

There’s only three extras. ‘A Brave New World’ is a new 10 minute interview with film editor Michael Spence. He started off as a film editor doing the promotional trailers before re-cutting films. Seeing what he did for New World, I suspect many of you would have seen his work without realising it. He only touches on ‘DefCon 4’ briefly and gave it a fresh edit because this Canadian film wasn’t working in its original form when New World bought it.

‘Nemesis Descending’ is a new 11 minute interview with composer Christopher Young. His job was to re-score films based on his reputation of being able to do it on a low budget. The music was re-used in ‘Godzilla 1985’ amongst others. You’ve definitely seen his music in other horror films.

The last is ‘Exploring The New World’ is a new 16½ minute interview with writer Chris Poggiali looking over the New World films. Just a reminder in case you didn’t know, this is Roger Corman’s company and he gave many of the now big directors their break. However, this was after he left them.

‘DefCon 4’ is a bleak film and despite being made 34 years ago and on a low budget is actually still relevant. Its budget is clearly on film. It would have been interesting to have seen the original cut to see what the differences between the two versions. I suspect those new to it will compare it to the ‘Mad Max’ films but I think it stands better alone. Max never had to deal with the problems Howe had.