I should point out from the start that by ‘Year’s Best SF’, editor David G Hartwell is referring to 2012. You have to check against each of the twenty-eight stories as to where they were sourced from instead of the indicia but they appear to be across the spectrum and with only one that I remember from elsewhere. Megan Lindholm’s ‘Old Paint’ is a great way into this anthology. A semi-intelligent AI driven car is infected by a virus but gains a bit more of a personality of its own. The story is driven (sic) from the family who inherits it and is more like a social commentary where things in the future don’t change too much from now. Lindholm is an endearing storyteller and even a sprinkling of SF still makes it effective.

‘Electrica’ by Sean McMullen is set in the Victorian era and Lieutenant Michael Fletcher being sent to assess a new wireless signalling device to prevent the enemy reading military messages sent by semaphore. For an Australian author, he gets much of the time period right which is unfortunate when the single blemish is with diet. In that time period, I doubt if beef would have been on the menu of even the upper classes and certainly not called ‘beefsteak’ like those across the pond or down under.

There are a couple detective SF stories in this volume. The best is probably Naomi Kritzer’s ‘Liberty’s Daughter’, although for the opening pages you had to keep re-thinking just who Beck Garrison was in both terms of sex and age on what amounts to be a colonial island. In many respects, Kritzer could have gotten away with making this a general genre story but, the elements that make it different with community dining areas and legitimising criminal companies, gives a scary feel. As this is part of an upcoming novel, Kritzer will no doubt develop this further.

Kathleen Ann Goonan’s story ‘A Love Supreme’ has an interesting SF setting using nanotech which becomes so much window dressing to the overall story. No matter how well-written a story is and this one is and call me old school, but aren’t SF stories supposed to be using these aspects towards the conclusion of the story?

I’ve read Andy Duncan’s ‘Close Encounters’ in another anthology but it’s a worthy acknowledgement of story quality. Without giving away the ending, a reporter re-interviewing contactees finds someone is ahead of him.

You could have knocked me down with a feather with Ken Liu’s ‘Waves’. A truly epic SF tale hitting on all the mythological creations as humanity has its personalities transferred from flesh to mechanical and prolonged life-spans.

‘The Woman Who Shook The World Tree’ by Michael Swanwick tells the story of female prodigy Mariella Coudy’s discoveries with black holes and Richard Zhang who talks himself into working for her to make a practical teleporting device. A romance develops between them and when Zhang is seemingly destroyed in an explosion, she…well, that would be telling.

Something that is still getting quite prevalent with recent SF anthologies is that although the stories are invariably well-written, they aren’t showing much in the way of innovative ideas. Even worse, they aren’t even recycling old ideas. The seven selected above were the highlights for me and with the rest, I hate saying this but they really do need to buck their ideas up. 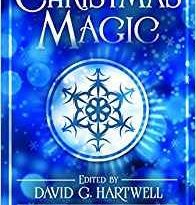