Here’s a book about a hobby taken to an extreme. Casual birdwatching is common enough, and some people take it a bit seriously, planning daytrips or summer holidays to places with particularly interesting variety of birdlife. But Noah Strycker aimed even higher, taking himself around the world with the aim to ‘spot’ at least half of the known 10,000 species of bird within a year. 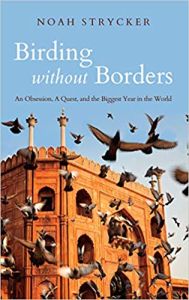 This book, ‘Birding Without Borders’, is the story of that adventure and it can be fairly called an adventure given some of the situations he experiences. But does the book slip into being a self-indulgent recollection of one man’s attempt to achieve something both pointless and expensive? The title, recalling both ‘Médecins Sans Frontières’ and ‘Reporters Without Borders’, would seem to imply some deeper meaning to his expedition, about politics or environmentalism perhaps, wouldn’t it?

Realistically, though, this is simply a book about a man who is lucky enough to be in a position where he could travel the world doing what he enjoyed. For sure, Strycker does share his observations of the places he visits, giving insights into the way people are changing the world around them. The palm oil plantations of New Britain, for example, where he comes across a rarely-seen species of owl, are taking up increasingly large parts of the land that used to be rainforest. His surprise at finding the Golden Masked Owl there provides a little optimism to what could otherwise have been a rather depressing narrative of degraded habitats and declining species.

Strycker also happens to be a competent storyteller, as you’d expect for someone with his experience of editing magazines and writing books. But the book is measured, discrete and ultimately superficial in what it says about both the author and the world he’s travelling through. There are hints of his emotional state here and there, but they’re not really developed much. At the start of the book, we’re told he’d broken up with his girlfriend and then decided to quit his job and use almost all of his savings to fund his birdwatching trip around the world. This reaction or over-reaction prompts a great many questions but, for the most part, what we get is Strycker telling us how he got from A to B, what he saw and ate while he was there and how rare or otherwise were the birds he bagged on that leg of his trip.

Certainly his enthusiasm helps to propel the story forwards and his experiences are often engaging and sometimes quite funny. The fact he clearly adores birdwatching reminds even a casual reader just how beautiful our world can be and could still be if we were a bit more thoughtful in how we looked after it. There’s also something very heart-warming about the bonds he makes with birdwatchers in Ecuador, India, the Philippines and all the other places he visits. Too often we hear about separates people in different countries and cultures but, when it comes to hobbies, those barriers seem to disappear.

Ultimately, Strycker’s a man from a relatively privileged background having fun travelling around the world. Occasionally, this comes through so strongly it’s hard not to be shocked: describing his trip through Cameroon as ‘an intense journey into the heart of darkness’ seems to imply an ignorance of what Conrad was trying to convey in his novella. It’s the ‘Audubon Magazine’ or ‘National Geographic’ approach to journalism, inoffensive and agreeably presented with a likeable, if conventional voice. 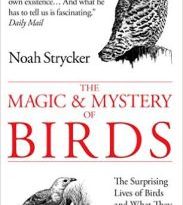 The Magic & Mystery Of Birds by Noah Strycker (book review).

The Magic & Mystery Of Birds by Noah Strycker (book review).