‘Voyeurs Of Death’ is a single author collection by Shaun Jeffrey from 2007 featuring very short stories, most of which have appeared previously in some other horror magazine or anthologies. This means that some editor paid good money for them and was confident they would please the punters which is the best recommendation you can get. Four of the stories are previously unpublished but, in all honesty, you would never guess which if he didn’t tell you. After a one sentence summary of each tale, cunningly including the title, I will give you my overall impression. 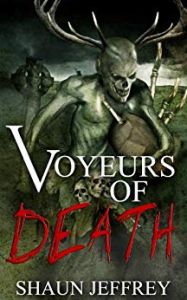 Ethan Cullen and his colleagues want to set up a holiday resort on the Scottish isle of Inchcullen but ‘The Flibbertigibbet’ has other plans.

‘The Watchers’ are people who want to see Luke and his new girlfriend, Geraldine, have sex in their car which might be fun.

A ‘Paranoid’ woman wakes up in what seems to be a hospital but the windows are barred, her head is shaved and the doctors don’t have a reassuring bedside manner.

‘The Tunnel’ is a drain leading towards a haunted house where peer pressure ruined a man’s life several years ago and now he’s back to try to fix things.

‘The Quilters Of Thurmond’ sew lovely quilts and give them to the young people of the village when they go off to the mainland to protect them.

‘Sin Eater’ comes around to your house and listens to your family as they confess their sinful thoughts and deeds, no matter how embarrassing.

‘Voyeurs Of Death’ gather at a car crash to look at the victim which reminds me of an old Ray Bradbury story but this took a different turn.

It should be all part of the normal ‘Life Cycle’ when Frances Hulme, a desperate whore and junkie gets pregnant, presumably by one of her customers, but she gives birth to something very strange.

Things go ‘Dark Inside’ a cruise ship when they rescue a lone boat on the ocean and it’s full of rats that carry a deadly virus.

Deaf Alex uses his mechanical skills to make a dead cat go like ‘Clockwork’ but it works better than expected.

A ‘Venetian Kiss’ might be a bite from one of that city’s mosquitoes or it might be something more deadly, especially at carnival time when the mask can conceal anything.

The ‘Peacock Lawn’ belongs to a rich man who wants to build a shopping centre on a swamp but soldiers who died in battle there might have other plans.

‘Envy’ is what struggling b-movie actress hopes to promote in her colleagues by getting a very special dress to wear to the premiere and she succeeds beyond her wildest nightmares.

‘Park Life’ is flash fiction with a family at a zoo and a nice little twist at the end.

It’s all good and some of it is very good indeed. This is mostly because Shaun Jeffrey not only gets the basics right but also adds and ruffles and flourishes like similes, metaphors and wit. Getting the basics right gives him a sound footing for the rest. The basics are:-

1) Naming your characters and describing, preferably with some style, their physical characteristics.

2) Having a solid sense of place, the setting for the story, again with some description to bring a sense of mood or danger or enchantment.

3) Making the reader care a little bit, given the limited page count, what happens to the lead character.

4) Having a satisfactory ending. These tend to the twist in the tale which is not the only option but is a popular one for very short stories.

I thoroughly enjoyed the book and am happy to report that Shaun Jeffrey has moved on since to write novels and even had one of his novels, ‘The Kult’, made into a film which will be released soon. It’s also worth noting the fine pen and ink illustrations by Zach McCain, one for each tale, that adds a little extra touch of the macabre. All in all, an entertaining little collection that’s well worth reading.