The latest copy of ‘Back Issue’ proclaims it’s a ‘Superhero Romance Issue’. Well, judging by the opening article by Bob Greenberger, it’s all about marriage as he covers the DC and Marvel Universes and how successful they are. I still think Avengers # 60 is one of the best covers of marriages or anything else. 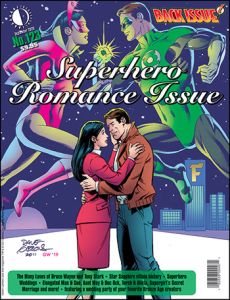 I had forgotten all about Dr. Octopus romancing Aunt May Parker and editor Mike Eury puts writer Gerry Conway under the spotlight as to how it happened. I suppose it could have been worse and have May swopping wrinkle stories with the Vulture.

Reading Brian Martin’s article on the romance between Hal Jordan and Carol Ferris, who occasionally transforms into the powered Star Sapphire and causing him problems as Green Lantern got increasingly quirky, more so as Ferris also became part male Predator (not that one).

More tragically, Dan Johnson looks at Ralph and Sue Dibney, one of the longest successful super-hero marriages until ‘Identity Crisis’ when his wife was raped and killed. It’s writer Brad Meltzer explains he was given a list of people fans cared about to kill and I’d love to have seen that list. Meltzer, to his honesty, didn’t want to choose Sue Dibney until he realised the repercussions it would have throughout the JLA would make a stronger story.

John K. Kirk takes a difference stance comparing billionaires Bruce Wayne and Tony Stark’s love lives and how it got in the way of their alter-egos and what was more important to them. There also seems to a predisposition for redheads.

I’m less sure about James Heath Lantz combining the odd romance between Green Lanterns Hal Jordan and Arisia Rrab compared to Peter Rasputin and Kitty Pryde, just because of the differences in ages. I do remember from my X-Men days and there was a smaller age gap between the pair and a reference given the Russians at that time felt less about the gap at least romance grew.

I think the marriage of Alicia Masters and Johnny Storm happened after I dropped out of comics scene but Franck Martini covers the history and the twist ending. It did make me wonder if they are going to undo things, some thought should be given to it the solution in case it is needed.

Oh, there’s a small gallery of relationship heroes and heroines before hitting on an article by Eddy Zeno looking at ‘Supergirl’s Secret Marriage’ prior to ‘Crisis On Infinite Earths’ when she was briefly an amnesic. In some respects, you do have to wonder how alien species in the DC and Marvel Universes have similar marriage customs to terrestrial.

I did have a wonder on any he could have missed out and outside of these there is the ghost who walks, the Phantom, although I can’t recall any mention of what happened to his predecessor’s wives. You would also have to wonder if E-Man and Nova Kane ever married at some point?

However, not a mention of Alex Summers and Lorna Dane, who’ve had an enduring relationship well, for some time before comicbook writers messed that up.

Reference is given to relationships that have been covered in earlier ‘Back Issues’ although I do wonder about Kent ‘Dr. Fate’ Nelson and his wife, Inza.

I do wonder if a follow-up issue should be done covering super-villain marriages or, as has currently be going on, having their children turned adult coming out of the woodwork replacing them.

As you can tell from my asides above, I spent a lot of time thinking about who they missed out and I suspect the same will apply to many of my generation out there as well. When an issue can do more than just read, then you know it has to be a winner. 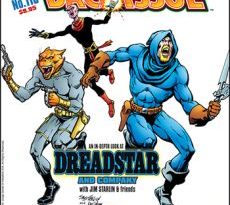 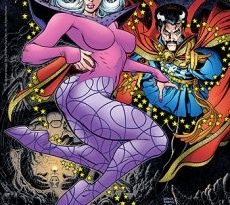