I still have a wild smile on my face having acquired a tabloid paper copy of Back Issue # 61, now ten years old. The American ebay offers it from $99.95 and in two recent instances in the UK, its been around £40 or £30. The original price was $10.35. They don’t pop up on-line very often and I balked at the higher price/ I guess having a double cover of the Legion Of Super-Heroes by Alex Ross, not to mention an interview with him and writer Paul Dini might have something to do with making this a rare TwoMorrows edition, although an A4 reprint equally sold out.

There’s a comment from them that DC Comics were told that retailers didn’t know what to do with the tabloid format but clearly there is still a market for it as both DC and Marvel have released comicbooks this size and bigger in recent years. 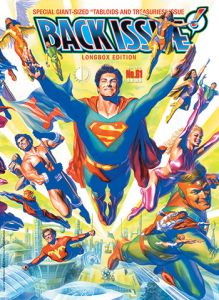 The tabloid size of Back Issue # 61 mirrors the tabloids DC Comics and Marvel Comics did reprints of their comics and some original material in this format. Oddly, Marvel didn’t do anything with the New X-Men in this format.

Some of the information about these tabloids I already new but there was also a lot more new information. DC Comics did some early experiments using ‘Shazam!’ and Christmas Specials before doing their first issue specials. I’m less sure about seeing Action # 1 or Detective Comics # 27 at a larger size as artwork wasn’t designed that way. However, when you have comics like ‘Rudolph The Red-Nosed Reindeer’ with that in mind, it could be pulled off. Don’t forget, back in the day, a dollar for one of these big books was 4 or more times the amount you paid for a comicbook. In the UK, we had them around 50p but a lot harder to find in local newsagents although I later found a batch in the local seaside towns and had a field day.

It’s hardly surprising that Superman had the most use at this size, not to mention the comicbook adaptation of the Chris Reeve starring film. Probably the oddest choices was ‘The Bible’ and the joint venture between Marvel and DC Comics with ‘The Wizard Of Oz’. Jack Abramowitz’ article on the subject was most enlightening because it was less a joint project and more a case of neither company wanting to step on each other’s shoes with sales. I missed out on that one at the time, the same with ‘Super-Friends’ and it looks like I missed an article by Alex Toth on animation in there in that time period.

Of course, the big thing was the DC-Marvel crossovers and Glenn Greenberg hits all the right marks with his piece on the subject. I do wonder on one thing. All this tabloids happened from 1976 onwards and yet neither the X-Men or Titans were considered for such a size, let alone a cross-over. I’m not forgetting Marvel Team-Up # 4 featuring the original costumeless X-Men in Marvel Treasury # 18.

Looking at Chris Marshall’s checklist of the tabloids/treasuries: DC: 53. Marvel: 48. Others: 15. The latter I didn’t know existed. It would be interesting to know who collected and kept them all. I have some but certainly not all. Of course, there have been even bigger sizes since.

Tom Powers has a look at Jack Kirby’s ‘Captain America Bicentennial Battles’ and the number of different inkers, including Barry Windsor-Smith, on the art.

The biggest concentration from then is at DC, where in different tabloids, Superman faced off against Wonder Woman and Shazam! aka Captain Marvel indicating big battles sold.

Incidentally, the ‘Superboy And The Legion Of Super-Heroes’ tabloid All-New Collectors Edition # C-55 which is also covered here has just been reprinted at the same size it originally came out in as a hardback.

As I said at the beginning, The selling point is obviously Alex Ross and those four tabloids he’s done and you do see some of his pencil art here. The same also applies to his recreation of the LSH flying. Although I think the secondary market price is way over the top, I hope there’s enough interest here to encourage TwoMorrows to do a third reprint at any size and see it sell out again. 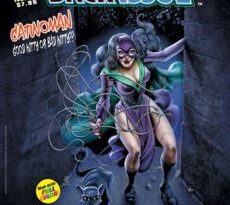 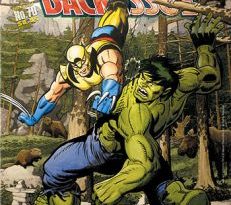