The latest issue of ‘Back Issue’ has the sub-title ‘Make Mine Marvel’, so you should guess which company predominates. Interestingly, the first two articles centre on Carmine Infantino, outlining his history before focusing on his artwork at Marvel as he got his art mojo back after being fired as editor-in-chief at DC Comics. The second is an interview with the now late artist pointing out which he comics he favoured while drawing for Marvel. 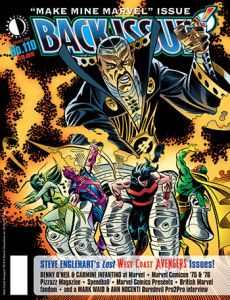 The look at Mighty Marvel Comicon 1975 shows how queue-less it was back then compared to what happens today. There are insights from various people who attended and how easy it was to get autographs, not to mention buying original pages. There was also some early cosplay there as well and was seen as the way to get women interested in attending cons.

Robert Menzies’ look ar the letter pages in British Marvel comics doesn’t really differentiate between the Power Comics and the later Marvel UK fans which was over 5 year gap. I had a letter in the final issue of Power Comics title ‘Pow & Wham’ and got me an orginal Romita Spider-Man tee-shirt which I still own. I’m less sure about the aggressive nature of the letters printed in the Marvel UK product when Menzies doesn’t show any other type of letter.

It isn’t as though its editors couldn’t control what letters they put into print. Likewise with the lack of American comics in the UK. They were there in the normal newsagents but not with the English comics but in the rotating magazine racks. These rack weren’t really discontinued until the mid-70s and the American comics were literally in a diminishing pile.

Steve Englehart reveals his original plans for the Celestial Madonna Mantis in the ‘West Coast Avengers’ before being taken off the book. There is also an examination of Mockingbird’s dual role as being an agent of SHIELD first in her decision making and being a super-heroine which resulted in her breaking up with Hawkeye after she killed the Night Rider. Seeing the circumstances here and the reasons, chances are you’ll side with her. To Hawkeye’s defence and considering he uses the most lethal hand-weapon anyway, once you start killing your opponents to win, you’re on a sticky slope to being no better than your enemies.

I only ever picked up a couple issues of Marvel’s ‘Pizazz’ but, even at the time, wondered if I was the right audience for it. Reading Dewey Cassell’s article on the subject, it looks like I was probably right. Oddly, it was trying to emulate Jenette Khan’s ‘Dynamite’ magazine prior to her becoming publisher at DC Comics so I hope they give a look at her version at some point.

The interview with Denny O’Neil and his second tenure at Marvel gives some interesting revelations about his time on Spider-Man, Daredevil and Iron Man. It’s also nice to know he finally got a cheque for the film use of the latter’s character, Obadiah Stane.

The look at ‘Marvel Comics Presents’ shows its creation was to prep newcomers who weren’t quite ready for the main titles although that only became an occasional thing as the regular pros did work there. Although I was a regular reader, I did wonder if it could maintain a readership of 8 page continuing stories in the USA to an audience who wasn’t really used to it. The elusive editor Terry Kavanagh seems to miss having a photo but a scan on the Net also shows he’s photo-shy there as well.

Ed Lute’s look at the Marvel character Speedball does reveal that Steve Ditko wasn’t the original choice for the art but when brought on-board gave it a 60s feel. The failure of the comicbook was not bringing in enough of other Marvel Universe characters to establish him there. My own memories of Speedball was he was a little too powerful with nothing to really stop him.

Finally, John Trumball’s transcribed ‘Writing Daredevil’ panel from the 2016 East Coast Comicon with Anne Nocenti and Mark Waid, both of whom at different times wrote 60 issues of DD. There are some interesting parallels about how to deal with the Man Without Fear. One thing I would like to add is there is the necessary technology out there that allows blind people to read the Internet and indeed computers generally converting text to Braille.

As usual, ‘Back Issue’ is a wealth of information about the Silver Age of American comics and a great memory stirrer. 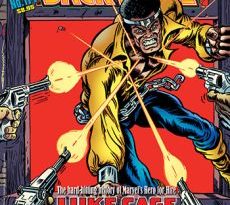 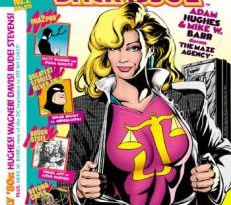 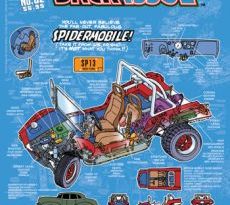