It should hardly come as a surprise looking at this edition of ‘Back Issue’ that the subject is martial arts characters in the comicbooks. The major influence of this obviously being a certain Bruce Lee. As the opening article is about ‘Shang-Chi, Master Of Kung Fu’ that shouldn’t be surprising as he looked more like Lee as time went on. Oddly, neither writer Doug Moench or artist Paul Gulacy had seen ‘Enter The Dragon’ before working on the book or for many months later, although the latter says it was a bigger influence after that. Marvel had the licence to play with the Fu Manchu characters from the Sax Rohmer Estate and, although it was inserted into the Marvel Universe, rarely did any of the super-heroes infringe on them. Shang-Chi himself only met them if he came up in any of the team-up books rather than introduce them into his own title which was quite unique. Whether this had any effect on sales is hard to say although it’s noted that it was third from the bottom in that regard. In some respects, I can understand editor-in-chief Jim Shooter’s frustration at that but MoKF had a loyal following and I was one of them both for the writing and the art, not just with Gulacy but also Mike Zeck and the late great Gene Day amongst others. When you consider none of the characters had super-powers, its continual following was even more remarkable. If you’ve never read the original comics, Marvel have now issued them in their ‘Masterworks’ collection and, if you can afford them, it’s well worth the effort. 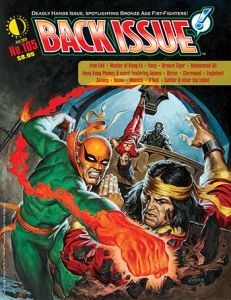 I know less about Charlton’s ‘Yang’ comicbook but considering that it came out 3 days before ‘Shang-Chi, Master Of Kung Fu’, just goes to show how close release dates for similar ideas to go on the shelves can be. More so, if they want to catch a trend, although as shown later, DC Comics were always late at doing that.

Then it’s back to Marvel Comics, with their black and white magazine, ‘The Deadly Hands Of Kung Fu’, although as those involved would call it ‘The Deadly Feet Of Kung Fu’ when the illustrations and covers show so much foot action. Much of the emphasis is on the ‘Sons Of The Tiger’ and ultimately, the White Tiger. I wasn’t aware of how many people took that name as their non de plume.

Of course, Iron Fist is covered. A personal favourite considering how many of the Dave Cockrum cover designs for the title I have in my collection. Considering how Iron Fist is now getting TV exposure, you might want to check out his early material here. I wish a little more time had been spent on Colleen Wing and Misty Knight as the ‘Daughters Of The Dragon’ but there’s a lot of ground being covered here.

I can’t recall ‘Hong Kong Phooey’ being shown in the UK but am now puzzling how 31×15 minute episodes were put into 16×30 minute shows. What is more significant is when it came to the Charlton Comic of the same name was it gave Mike Zeck his first break. With the successive article on Atlas Comics’ one-off, ‘The Hands Of The Dragon’, was giving Jim Craig his break.

From there, we enter the world of DC Comics with the ‘Bronze Tiger’, derived from a Dennis O’Neil book, Kung Fu Master: Dragon’s Fists’, under his pen-name of Jim Dennis. A troubled character but who seems to have had a long life, more so when he joined the Suicide Quad.

The odd articles in the pack have a look at Muhammad Ali, including his Mega toy. I think this is also the first time I’ve actually seen the Joe Kubert’s first version of the ‘Superman Vs. Muhammad Ali cover. There’s also a quick look at Ali’s animation life.

If you remember the Count Dante adverts in the comicbooks of the 1970s and his Black Dragon Fighting Society. Thankfully, no one died from his so-called ‘death touch’. Then again, Dante died of from a bleeding ulcer in 1975.

The interview with Neal Adams covers Continuity’s ‘Armor’ title and then a spectacular look at his ‘The Deadly Hands Of Kung Fu’ painted covers sans logos. Even if the rest of the material isn’t your taste, this section alone is going to sell this issue.

Martial arts might have been a fad in the 1970s but it hasn’t really died out and continues today. It does make me wonder why the comicbook companies didn’t return to the genre. Maybe you need more than martial arts when it comes to facing super-powered foes. These days, super-heroes alone are the current trend. Back in the 1970s, comicbook companies were more prone to pick up on anything that would sell titles. With martial arts, they had something that could work in panels and tell interesting stories. 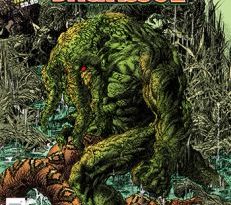 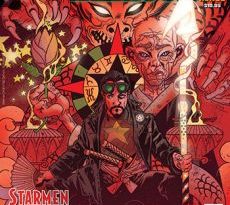 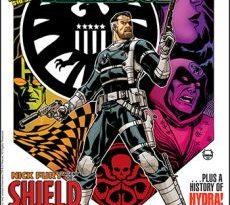