This Back Issue’s sub-title is ‘Not-Ready-For-Primetime Marvel Heroes’ which paraphrases the title of a Saturday night American TV show. Really, it’s a selection of 13 super-heroes that didn’t really get promoted beyond secondary status for one reason or another. Then again, how do you get a runaway star?

Neither Wolverine or Punisher were seen that way when they were created. Each of them deserves some comment. Considering how some secondary characters, like Rocket Raccoon, in the MCU films have risen in status, I read this issue with that in mind in case anyone thinks they should be given a chance. 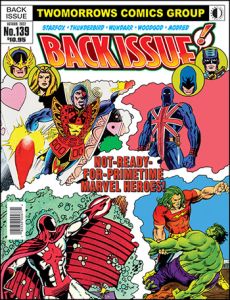 We start with Nighthawk and writer Brian Martin goes over his history from villain to hero. Mind you, he did do a lot better than his Squadron Supreme team members. I did tend to look at his oddly, mostly for his odd costume and even the Hulk didn’t like the mask. Miraculously, when Steve Gerber took over his reins in ‘The Defenders’ and put him through the wringer that he became a lot more interesting.

In contrast, Dr. Walt Newton as Stingray, hyphenated or otherwise, had an impressive costume created by Marie Severin and wasn’t really out to be a super-hero as writer Dan Tanderich covers his history. His point that when Sub-Mariner and Triton weren’t available, then he came to the fore is very true, although he did get Avengers status. I hope someone in the MUC officers is paying attention to this issue because he could be a breakout star on film or TV.

When you have brains and gamma-strength, you have Doc Sampson, as writer James Heath Lanz, goes over his history. Objectively, I think the problem Sampson had was essentially always being shown as a secondary character than given a chance to branch out. Maybe if Sampson had other super-heroes or villains on his couch, apart from the Hulk, would it have worked as a mini-series? At least he can keep violent patients down. In answer to Peter David’s query as to the name of an object with ‘clinking steel balls’, that sounds awfully like a Newton’s cradle. Considering how She-Hulk has been given her own TV series, Doc Sampson could get similar status.

Discovering that Thundra was Marvel’s answer to DC Comics’ Big Barda from writer Ed Catto wasn’t too surprising, although I never made that connection when young. Come to think of it, I doubt if I would have made the connection to even being a more aggressive Wonder Woman. Considering the number of super-strong people on Marvel Earth, you do have to wonder on her fixation on the Thing.

I always found Eros aka Starfox a bit of an anomaly. I mean, as writer Jarrod Buttery points out, neither he or his father, Mentor, look anything like his purple-skinned brother, Thanos. He does make an interesting point about how heroic can someone be who can manipulate other people’s sexual amores for his own gain. Can someone be too charming? Then again, he had to be called ‘

Wundarr aka the Aquarian was Steve Gerber’s homage to Superman, albeit a little darker and missed opportunities, that had to be changed after DC Comics complained, according to writer Mike Eury. Objectively, Wundarr does share the trait with the Hulk in being child-like, except he really was, growing adult with a child’s personality. Both he and Adam Warlock have been regarded as being akin to being Christ-like, but could that work in film or TV series.

Currently, X-Man John Proudfoot, aka Thunderbird, is now among the few Marvel super-heroes who have stayed dead and not been resurrected, as far as I know, as writer Ed Lute goes over his history. In many respects, his brother, James, has taken over his costume and position so there has never been a need for his return.

I vaguely remember Modred the Mystic, as writer Ian Millsted covers his brief history. I do suspect the reason why he didn’t develop beyond a few issues and guest-appearances was being located in the UK at Stonehenge than interacting regularly with the other mystics.

Andy Mangels look at Jack of Hearts brings back memories of that detailed costume. To correct other pundits out there, it wasn’t designed by George Perez but by Keith Giffin and written by Bill Mantlo. He’s also another character I suspect would do well in the MCU these days. After all, his containment costume and his low life expectancy would add a dimension we don’t really see with other characters.

One thing that always struck me about the Shroud was he recognised Spider-Man out of costume, at the airport, was by his heartbeat. Of course, being blind, he couldn’t see him or know his real name but it always stuck in my memory. That almost gets a mention here as writers Joseph Norton and Ed Lute cover the Stroud’s history, created by Steve Englehart and Herb Trimpe to be an undercover hero infiltrating the super-villains. I do agree with Englehart that there is a lot of hidden potential there.

The biggest thing I remember from Woodgod’s first appearance in Marvel Team-Up # 53 was the two-page spread of the X-Men and Spider-Man kaging a lift on their flying vehicle. Writer Jarrad Buttery focuses on the satyr himself, bio-engineered and then his creator got killed and he has to cope on his own. Thematically, Woodgod just follows the tradition of other super-strong but not too bright characters in the Marvel Universe and just added to their number.

Paladin, as writer Douglas R. Kelly points out, is a super-human mercenary who prefers to get paid for risking his life, although will relent on that occasionally. You would think there would be more super-humans doing that but how many people would be in a position to need to pay for their services. I’m not discounting Silver Sable and her team and Paladin had worked for her from time to time.

Finally, we have Union Jack or rather three of them over the decades as writer Jerry Smith covers their histories, mostly stimulated by the World Wars. We British are less patriotic when it comes to the flag but the symmetry of the design gets around the problem of having the flag upside down.

Blimey, this review extended longer than I thought, even if I’m only remarking on how I reacted to the articles. I do think there should be more material like this, especially on significant supporting characters who have lasted over the years, if only to find out why they get into so much trouble. Everything to enjoy here. 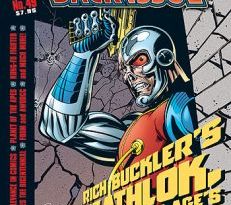 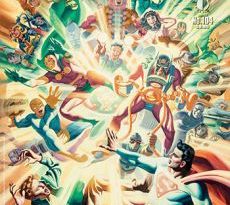 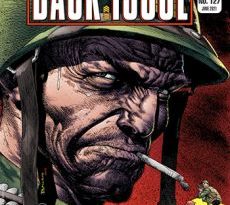