For anyone who doesn’t already know his work, Kim Stanley Robinson is one of the most well-respected living authors of hard Science Fiction in the world, perhaps most famous for his detailed depiction of the process of colonising another planet in his award-winning ‘Mars’ trilogy (1992-1996). ‘Aurora’ comes from the same vein of realistic space exploration stories, focusing in this case on the travails of the colonists on-board a generation starship heading to a nearby star in one of humanity’s earliest attempts at manned interstellar travel. 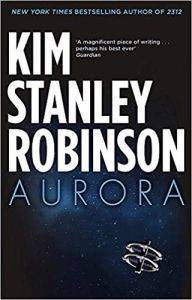 The story starts in the year 2704. The ship has been travelling for 159 years and is roughly a decade out from reaching its target, a potentially habitable moon orbiting the fifth planet in the Tau Ceti star system, some 12 light years from Earth. Seven generations of people have been born and died on the ship since it launched, with the current human population being around two thousand.

We see most of the story from the perspective of one family. The matriarch, Devi, is the ship’s chief engineer, a highly intelligent and resourceful woman who seems to spend every waking moment finding solutions to the ever-growing list of problems afflicting the ship after over a century and a half of interstellar travel at one-tenth of the speed of light. Devi’s husband, Badim, is a doctor but his real role in the story is as the calm, unflustered source of support to his over-worked and over-stressed wife and their wilful teenage daughter, Freya.

Devi has two main concerns: the ship and the colonists. The ship is starting to show its age mechanically. Although they have large 3D printers on-board and a programme of planned maintenance, systems failures that require urgent action are increasingly frequent. Similarly, the ecological balance of the agricultural system on which the colonists’ continuing existence crucially depends is moving ever further away from equilibrium, as a gradual loss of vital elements like potassium and bromine affect plant and animal health. Both of these factors impinge on the well-being of the colonists, although Devi’s main long-term concern is that they may be suffering from a gradual generation-by-generation decline in physical and mental capacity, as has historically happened to isolated populations of humans on Earth.

Devi does her best to keep all these different problems at bay for another eleven years, until they reach Aurora, as they’ve christened their destination moon. After braking into orbit, they take a gradual approach to colonisation, sending down a few people at a time to start bootstrapping the planned colony from local resources, aided by the robotic infrastructure that was sent on ahead of them. Aurora seems superficially Earth-like, in terms of size, mass, gravity and atmosphere but there are plenty of differences, too. The most immediate is the weather, with gale-force winds a frequent danger to the growing base. The colonists sensibly stay inside their spacesuits for the first 100 days, while their exobiologists analyse the local environment looking for hidden dangers. However, those spacesuits are large and bulky and make many routine activities difficult and time-consuming. The colonists become increasingly keen to take them off so they can explore their new home properly. What will they find when that moment finally arrives?

A frequent criticism of hard SF is that it prioritises world-building and plot over character. That’s not true here. The main characters, particularly Devi and her daughter, Freya, are developed in great detail through their actions and their exchanges with the other characters, including the ship’s AI, whose own character develops very noticeably across the span of the story. Devi and Freya are both strong, independent women with full agency who are both central to the events of the novel. Beyond these central characters, though, the supporting cast are also portrayed with sufficient individuality that when tragedies happen, as they do several times throughout the book, they make a genuine impact on the reader.

That said, Robinson is no slouch when it comes to world-building. What is fascinating about this novel, for someone like me who is deeply interested in the science fact as well as the Science Fiction of interstellar travel, is the extent to which he has done his homework and created a realistic and believable example of how a manned journey to another star system might actually take place. He’s not the first to write a worldship story, of course, but he brings his trademark level of scientific and engineering insight to the design of the ship and of the colony world they are headed for. If you like your SF to be rigorously grounded in a recognition that, to quote the immortal Scotty, you ‘cannae change the laws of physics’, an observation that every single iteration of ‘Star Trek’ broke on multiple occasions, of course, then you should enjoy ‘Aurora’ hugely.

The plot of the book, ultimately, can be summarised in the sentence ‘Will the inhabitants of the worldship survive their journey?’ This storyline plays out in a deeply engaging way, as Robinson puts one obstacle after another into their path and then stands back to see how Devi, Freya and the others will respond. Over a span of just under five hundred pages, split into seven long sections, that question is put time and again with the answer being genuinely uncertain on multiple occasions.

Given the amount of trouble Robinson throws at his characters, you might be forgiven for coming to the conclusion that this book is his way of trying to show that manned interstellar travel is ultimately an impossibility. Indeed, some of the characters come to this view and state it publicly, so it’s clearly a position that Robinson wants debated. However, similar things were said in the past about many other ground-breaking activities, including powered flight, breaking the sound barrier, flying rockets outside the Earth’s atmosphere and, topically, landing men on the Moon. It’s certainly true that interstellar travel, even by tiny unmanned probes such as those imagined by billionaire Yuri Milner in the Breakthrough Starshot Project, will be extraordinarily complex and challenging, given the huge distances and speeds involved. Adding humans into the mix will increase the difficulty level by several orders of magnitude more. That doesn’t mean it’s impossible though.

‘Aurora’ is another triumph of hard SF from Kim Stanley Robinson. If you’re interested in what might really be involved in getting humanity to the stars and the many obstacles that will need to be overcome, this is a must-read. 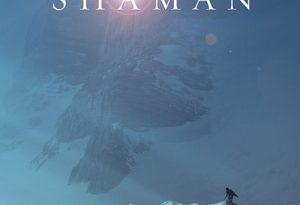 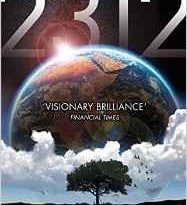 One thought on “Aurora by Kim Stanley Robinson (book review).”