Hailed as a classic of dystopian literature in Catalan, Llorenç Villalonga’s 1974 novel ‘Andrea Víctrix’ has now been translated into English for the first time and published by specialist small press Fum D’Estampa Press. It’s the story of a man, the unnamed narrator, who was cryogenically frozen in 1965 and who wakes up in 2050 to find his native Mallorca changed beyond recognition.

The book caught my eye for two reasons. Firstly, because I once had a story published in Catalan. Secondly, because I recently read H.G. Wells’ ‘The Sleeper Awakes’, which has a similar premise and I wondered whether this book had any similarities or whether it would be more like ‘Buck Rogers In The Twenty-Fifth Century’ or Cixin Liu’s ‘The Dark Forest’. 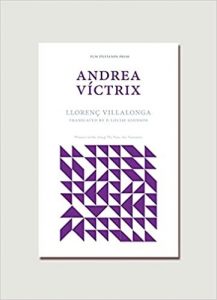 The book does have some similarities with ‘The Sleeper Awakes’ but, in fact, has more in common with Aldous Huxley’s ‘Brave New World’ which it refers to a few times. The ruling powers in 2050 Mallorca acknowledge the influence of Huxley in the formation for their society and their citizens take a drug called soma which is also named in recognition of ‘Brave New World’. This novel is much more daring than either of those earlier works, though, and is packed with satire, philosophy, ironic commentary and outrageous customs that border on the farcical at times.

The language used in this future time has shifted towards a lingua franca for the whole of Europe so that various phrases and pieces of dialogue occur in French, German or Italian and remain untranslated, while occasionally some dialogue is reported as being uttered in English. This is the kind of linguistic complexity that always fascinates me and increases my admiration for translators. The artificial language Volapük also gets a mention, which is a language I haven’t been translated into yet.

The titular character Andrea Víctrix is the island’s androgynous Director of Pleasure who takes the narrator under her wing soon after he emerges from cryo-sleep. At least, he assumes Andrea to be a her, but whether or not that is true forms one of the central questions that occupies his mind for most of the novel. As in Ann Leckie’s ‘Ancillary’ trilogy, the local language has become gender-neutral, in this case encouraged by the state’s attempts to do away with family, childbirth and personal attachment. The narrator struggles with these concepts and the institutions that have arisen as a result: state run child-rearing centres, child labour and a disregard for the value of life.

During the few months that the novel encompasses, the Europe-wide society begins to fall apart as the regime tries to convince its citizens that everything will be fine. There is much philosophising and reference to historical lessons, much of which I was unfamiliar with. At times, some of these interjected introspections may become too much for some readers, slowing the progress of the narrative to allow for discourses and conversations. Each of them allows in insight into the warped thinking of the regime though, embodied in the personages of Andrea Víctrix and the President of the US of Europe, the self-styled Monsieur-Dame. Many of the arguments have a modicum of logic to them, but it soon becomes evident that the whole system is modelled on a house of cards.

It’s a crazy, thoughtful, incisive, whirlwind of a novel in which I was often as bewildered at events as was the time-orphaned narrator. The colourful cast of characters presented a fabulous and unforgettable background to the story in their Romanesque clothing, androgenising makeup, gratuitous ballet poses and compulsive purchases. It’s a novel that will stick in your mind.