Another of the books about Science Fiction I pulled last year is ‘Alternate Worlds: The Illustrated History Of Science Fiction’ by James Gunn and only got around to reading now. A quick scurry through the pages and I was struck by the number of photographs of various Golden Age SF writers which made it immediately stand out as something unique. For its time period, there was a variety of black and white photos mixed with colour. Alas, the former affects the cover art. If ever there was an argument for a reprint with proper colours, this is it. 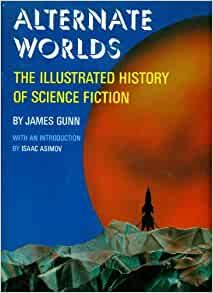 Isaac Asimov does the introduction and goes over the authors that influenced him to enjoy and write Science Fiction, that his father didn’t approve of. He also points out that James Gunn is an expert on English literature with a degree in the subject. I suspect it was more to point out not so much legitimacy but just a different qualification to himself. As James E. Gunn (1923-2020), he also wrote SF himself and seeing the list of thanks here to getting all the information together. There’s an allure of enthusiasm in SF from the start which always makes any book easy to read.

There are a lot of reminders in the opening chapters that Science Fiction didn’t really start until the technological age started. Yet, there are also so many examples prior to Mary Shelley that will make you stop and think about that as well. Granted that there were some odd ideas as how nature worked but who’s ever said SF has to be based off good science? We’ve seen examples of that in modern centuries as well, so that’s not exactly new. Not that the early writers were writing bad SF, just what it was based off. Although Gunn doesn’t say that in this book, there’s enough latitude to give me serious thinking on the subject which is always a good sign.

Something Gunn points out in the Jules Verne chapter is a quote from John Campbell that readers want writers to imagine in greater detail for them and something they hadn’t thought of before. I think that needs to be on every publishers and agents walls to improve the standard or variety of current Science Fiction material. Incidentally, Verne wrote 80 novels over the course of his career, writing two a year.

It’s also amazing how even prolific SF magazine writers like Phillip Senarens (1863-1930), regarded as the American Jules Verne is barely remembered today, even though he wrote under a variety of pen-names.

Once you get into the format of each chapter, Gunn starts off with the state of technology in each decade so it gears you up with what the SF authors of that day knew at the time. Logistically, for any of you writing SF, your technology often uses that as their starting point or what isn’t needed to be explained to the reader. In the appendixes at the back of the big, this is made into a date list which might be handy for some of you.

I should point out that there is an absence, other than UK authors like HG Wells, Mary Shelley, John Wyndham and Arthur Clarke, of foreign SF sources in this book. Equally, James Gunn makes no acknowledge other than Hugo Gernsback making the label Scientifiction becoming Science Fiction as being the first at anything else. I did check up on his non-fiction and there were at least 10 books after this first one and would need a bit of checking to see if he looks at foreign SF.

Gunn does cover a lot of ground although the bibliography is included in the text then as a separate section afterwards.

Oddly, the one real significant error someone should have picked up on is a photo caption revealing Captain John Kirk in charge of the USS Enterprise on page 224.

The exploration of the future as seen from the early 1970s has James Gunn thinking style will become more important than ideas. From 40 years in the future, we know where that went.

The price of this book varies a lot. I was fortunate to get a reasonably cheap second-hand copy. Gunn does make some good observations about the state of Science Fiction up to that time. The focus is more on American SF than world-wide and there are some odd gaps. For the life of me, I’m still wondering how Cordwainer Smith gets minimum coverage and barely gets two references. Even so, it certainly should be considered for a reprint, even if books on SF rarely get that kind of attention.