Of the four graphic novels based on Cixin Liu’s stories that I’ve read so far, ‘YuanYuan’s Bubbles’ is the first one where I haven’t previously read the original story, so this was a new journey of discovery for me. Like the other titles in the series, it’s been adapted into a wonderfully entertaining and human story where the big ideas are centred around individual relationships. Steven Dupre’s illustrations are bright and clear and do a fabulous job of portraying the iridescent bubbles that YuanYuan produces throughout the story, getting bigger and bigger as they progress. 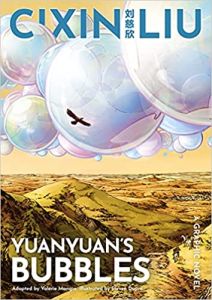 As a baby, YuanYuan as captivated by bubbles and as a child her bubble-blowing machine is a favourite distraction. Her father worries that it is a frivolous waste of time as she gets older, but her love of blowing bubbles and her ambition to make them ever larger never leaves her.

They live in Silk Road City, a new city built out in a desert area where heat and drought are a constant threat. Her parents were instrumental in building the city and are now working to save it, but YuanYuan seems uninterested in such mundane matters. The irritation this causes in her father, even amidst their otherwise friendly relationship, is well-illustrated in a series of conversations and facial expressions that are beautifully drawn.

The story brought to mind Cixin Liu’s novel ‘Ball Lightning’ where, for the most part, it doesn’t really seem to be Science Fiction, but concept after concept continues to add up in new twists and turns. ‘YuanYuan’s Bubbles’ is like that but on a smaller scale. It’s a more intimate tale of a father and daughter’s relationship over the years and the way their ambitions clash and mesh. The developments in YuanYuan’s bubble-making ability are not super-high-tech and fantastical, but each development is wondrous to behold.

Another thoroughly enjoyable graphic novel adaptation of Cixin Liu’s work and quite possibly my favourite so far. Such a touching story, maybe because I hadn’t read it before so I was even more caught up in the tale and the fabulous illustrations than with the previous volumes. I can see that I will be addicted to obtaining the rest of the titles as they are published.