Looking at the cover of this early ‘Alter Ego’ from 2015, its obvious that a large part is devoted to an interview with comicbook artist ‘Gentleman’ Jim Mooney (1919-2008), a few months before he took his own life while suffering ill-health. With DC Comics policy of not giving credits, you might not have recognised his work on Batman but if you are a Legion Of Super-Heroes fan, then you will surely have his early 60s work in ‘Adventure Comics’, significantly with the Command Kid storyline.

He also drew Supergirl’s own adventures but thought the strip itself was dull for repetitive plots, although he did create her cat, Streaky. Reading about Mooney’s career, I think you could easily sum it up as being dependable and meets deadlines with a good level of consistency. If anything, those same qualities meant, at least for the comicbook reader, he disappeared into the woodwork but, seeing the credits at the end, Mooney was literally everywhere over the years and a stalwart of DC Comics and Marvel Comics.

He was also versatile as both a penciller and inker, working across different genres and significant characters, including Spider-Man, should speak for itself. 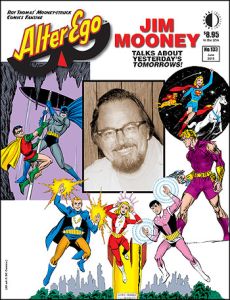 The sixth part of Amy Kiste Nyberg’s look at the history of the Comic Code, also points out that it was missing for a couple issues for lack of space, so I don’t think I’ve missed much. She gets up to the 1960s-70s, pointing out how the Underground Comix, while outside the Code, showed there was a market for adult-orientated comics. What is interesting is seeing comic companies themselves addressing ‘approved’ comics with markedly different results, more so pointing out that fairy tales were far more vicious.

Adding a point on this is that throughout the generations, kids like to be scared but also tend to read them on surface only. Adults tend to read a lot deeper into things and probably more jumpy. Interestingly, Michael T. Gilbert’s ‘Mr. Monster’ section also looks at Wertham with even more comicbook examples of nursery rhymes making it a good companion piece.

Bill Schelly looks at the start of ‘The Rocket’s Blast-Comicollector’ and how Gordon Belljohn ‘GB’ Love, despite having cerebral palsy, got the second long term fanzine going and built up an advertising revenue that became the template for several later American fanzines. As a comparison to UK fanzines that only really started a decade or so later, we had a lot less choice in what we had available for printing equipment.

The Fawcett Collectors Of America has the first part of a look at how they were reprinted in France. The funniest thing was seeing Mr. Scarlet and Pinky having their costumes coloured differently into green and yellow. I would question whether or not they were given colour guides or were passed onto different colourists. If memory serves, this happened with other characters, not solely with Fawcett, so it might also to do with what the colours represent in other countries. Of course, pink colour could also mean that they looked like they were semi-nude. Yeah, I know if you goggle them they have red costumes but earlier ones had them more orangey so they might have seen things differently.

This issue is still readily available and worth a read about comicbook history. Seeing Lightning Lad in his original costume did remind me that no one has ever addressed why his, for want of a common word, shorts overlapped his belt? Were they over-sized or the only type he could get? Considering how much electricity he generated, maybe they were rubber based to protect his nether regions. 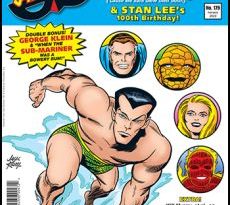 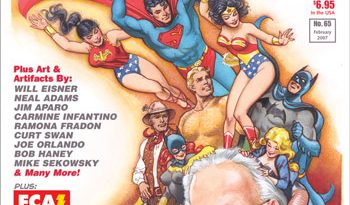 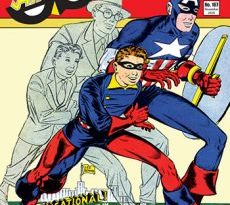