Why are those three alien Greys on the front cover of ‘Alien Invasion Owners’ Resistance Manual’ looking angry? Maybe it’s because they are sharing space inside this book with at least four other alien species that are reportedly coming to Earth on a regular basis, kidnapping people and doing all sorts of things alien people do under the name of research before possible invasion. Considering that quarter of a million people ‘vanish’ every year, one has to wonder why there aren’t more complaints from relatives and such to find them. Of course, they could be taking families as job lots. Author Sean T. Page doesn’t consider this amongst his statistics. The Greys get top billing because most people have heard of them and carry their description in their heads. Quite how at half our size they can be considered a physical threat is revealed within. However, getting them to smile is a lot harder. This book is a mixture of fiction, faction and reality. It isn’t as though people in high places think there’s something out there, especially as 31% believe something is going on even now. When it comes to Greys in fiction, I’m surprised that the connections to other TV series like ‘Stargate’ and ‘Roswell’ or even ‘Seven Days’ don’t get a mention. Then again, when they got on to the Draconians, I couldn’t help feel that there was a major influence from ‘V’, especially with these reptiles posing as humans wearing masks.

At that point, I moved away from some of the more tongue-in-cheek approach and put my thinking cap on. After all, it has been said that how abductees description of aliens match what they’ve seen on the box or cinema, then you have to wonder why we aren’t getting reports of them looking like Vulcans, Klingons or other  humanoids with odd wrinkles on their heads. Certainly, there are none that look like the Predator Hunters or the Xenomorphs. It isn’t like there’s been a lot of visual fiction of Greys outside of ‘Close Encounters Of TheThird Kind’, ‘The X-Files’ or my other examples above and with the former, they were hardly taking out the medical equipment. The Insectoids have a little more in common with ‘Dark Skies’. I did think the Nordics had been disproved after Billy Meier, the man in Swizerland’s evidence was also somewhat disproved. Oddly, author Sean Page missed out on the fact that the Nordics have been mistaken for angels in the past.

If you want to really play a game with this book, although Page never identifies sources, test your knowledge and see how many you can place.

I’ve never come across CE5K before but then we’ve never had a real alien invasion neither. It’s hardly something that could be kept out of the news these days.

With some of the precautions listed, I have to confess that I’m not really convinced that silver foil is much good. It might keep out microwaves but long wave radio transmissions might work and who’s to say that any alien species can’t modulate their signal or up its energy output. I’d also like to see someone make a silver foil hat without tears and…er…tears. Remember your phonetics and two words spelt the same way, pronounced differently and with two different meanings.

Something that isn’t covered when disarming an alien is what to do with their gun, especially as it’s likely to be too small for human hands. There is also a lot of inside information from all five species as to their intentions regarding the Earth. You would think that they would be stepping on each other’s toes all the time and have a war amongst themselves before deciding who will line up to exterminate us. Now that would make a good story. Even more so, as the little green men choose to use tripod vehicles on Earth but would HG Wells’ estate be able to sue them for copyright infringement?

Amongst the UFO identifying silhouette chart are several familiar space vessels although none appear lost in space or from SHADO come to that.

I should also point out that this is one book that you will never get dirty or rather if you do get your dirty mitts on it, you’ll only add to the stains and marks already in it. There are no tea stains however suggesting that this is the way these aliens drug you into not seeing them.

In some respects, I do wonder if Haynes should do a more serious book about UFOs just to balance things out. In the meantime, if you just want to make people think you’re a little paranoid, then this book will either give them grey looks or the odd chuckle and remember, silver foil has other purposes than cooking jacket potato and poultry in. 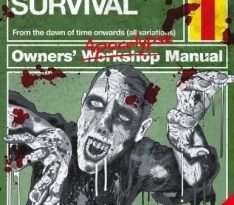