Howard Suber has been teaching 65 different film courses at UCLA’s film school in the past 46 years. Many of the people in Hollywood have been through his courses and he gets a lot of letters asking him specific questions about the film industry. What Suber has done with ‘Letters To Young Film Makers’ is to distil things down and answer them all in this book. It might also allow him to answer different questions as well as many of them here must have been asked time after time by various students. In other words, Suber is the voice of reason in the film world and employed as such in the industry beyond his lectures. There is a lot of information to digest here. Picking out the odd ones here are purely because how they struck me. One of the strongest ones is why scriptwriters are so low on the totem pole and seen as expendable because once the script is written, it is then seen as a property and further work can be done by other people. No wonder so many scriptwriters want to become directors and producers to keep control, although a later letter reveals that is how they managed to get pumped up the line. Reading into that, if you have talent, always keep more than one skill going and have a script in your back pocket.

Suber also draws attention to the famous discussion on ‘Marathon Man’ (1976) between Dustin Hoffman and Lawrence Olivier about acting, albeit paraphrased. I’m often puzzled by Hoffman’s authenticity because he didn’t let them drill his teeth for real. Suber uses this as an example of write what you know. As a fiction writer, I apply the credo of what you don’t know you research and then imagine.

What I found interesting is getting some understanding of some of the deal-making or sharing that is done to ensure some films are made as witnessed with ‘Gorillas In The Mist’ in 1988. Film-making is a business and even off-laying expense draws comparison to me of how bookies spread their betting odds and bet themselves so not to take too big a loss.

Some things are more obvious, like writing for the audience than for the studio readers and the other people before it gets closer to the top, although I can see the confusion because it’s too easy to see the label first. If anything, I’m puzzled how a trend can develop if a film can take 9 years to be made when something like ‘The Martian’ film is made within 4 years since the book’s release. Mind you, that doesn’t mean it wasn’t optioned before the book’s release. One thing that does come out of all of this is always have a written agreement, even if the people involved are the best of friends. As Suber points out, you must always look for a time when things aren’t always amicable.

Understanding the mindset of producers came from one of these letters. Just because they say they like something, doesn’t mean they’ll pursue it and if you learn nothing else from this book, keep looking until someone offers you a contract, even if it means they might pay you off, this applies to upcoming producers as much as scriptwriters, to use their own team, but at least you get paid and get that needed credit on your CV.

The topic of copyright and ownership covers several pages. Suber explains why a studio wants copyright although I do wonder why it can’t be put in both names.

Although this is only a small book, there’s a lot to learn even if you don’t live in Hollywood you’ll get a better understanding of the American film industry. If you are learning film-making over there, read this book before emailing Suber because he might have given the answer already. 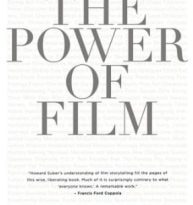 The Power Of Film by Howard Suber (book review).

The Power Of Film by Howard Suber (book review).