Mark Thomas McGee and R.J. Robertson’s book ‘You Won’t Believe Your Eyes’ is a slightly tongue-in-cheek look at the SF/horror movies from the 1950s. Considering how many of them had B-level budgets, that should hardly be surprising because it was usually the effects and script that felt the most cuts. Imagine what would happen if that wasn’t the case today. Rather than do a year-by-year examination, the eleven chapters are divided into categories, opening with satellites and spaceships. In the introduction, the authors point out that many of the SF films were really horror films in disguise. I hadn’t realised until now that Roger Corman’s 1958 film, ‘War Of The Satellites’, was the first to use the word ‘satellite’ in a film title. Mind you, I can’t recall much use of a satellite in the film. Something that is over-looked but not here about these 1950s genre films was they did allow the women to step away from the kitchen sink and have roles as scientists.

Considering how well known the 1958 film ‘This Island Earth’ is, you would have thought these authors would know better than placing the Metaluna mutant on the trip back to Earth when it was there on the way to Exeter’s home planet. Speaking of which, it does seem odd that the Americans see the name ‘Exeter’ as exotic when in the UK, it is the name of the main city in Devon, a county down from where I live and accepted as the norm.

No wonder there was so much distain of films back then. One interesting reveal is if a composer didn’t create 90% of the music for a film they there was no screen credit, hence multiple composers doing the work or even swipes from other films. I had a thought about that wondered if it also could be seen as a training ground until you saw even the likes of Henry Mancini got caught in that trap.

Having seen ‘The Creeping Eye’ (1958) a couple years back, I do think the authors can’t tell the difference between Australia and Austria, the setting where the film was supposed to take place.

An interesting observation that they make about Ed Wood’s ‘Plan 9 From Outer Space’ (1958) is that it might be considered the worse film ever but it was at least watchable compared to some of the others they examine in this book. Likewise, all the lost worlds or plateaus of hidden dinosaurs all get destroyed by the end of their films. Considering the amount of time and research taken to preserve rare species these days, I wonder if that will be taken into account in the next batch of such films in the modern age?

Something that needs to the reiterated here is ‘The Beast From 20,000 Fathoms’ story was swiped from a Ray Bradbury story and when the author was invited in to give it a critique of the script found it was his own story and the producers forgot that. Only in Hollywood. They did pay for the rights at that point.

We all know the use of condoms in the jaws of the Anderson TV show puppets and even the ‘Alien’ xenomorphs and although they are described as ‘prophylactics’ here, the condoms not the aliens, they were also used as raindrops in ‘The Incredible Shrinking Man’ (1957)

Probably the biggest flaw with this book is continually referring to the actors than the parts they play in these films and you don’t get them at all. Whether this absence is to keep the page count down, not very likely, or for some other reason reduces its value as a reference book. Well, that’s not strictly so because four of them do, ‘Teenage Zombies’ (1954), ‘The Maze’ (1953), ‘The Mole People’ (1956), ‘The Attack Of The Puppet People’ (1958) and most of chapter ten.

For such an apparently small book, there is a lot to read and digest covering mostly American, a few UK and one Philippines films. Although I haven’t seen all the films from this period, I’ve seen more of them in recent years and apart from the odd errors above, the information looks mostly reasonable. It would be interesting to have a comprehensive look at the 1950s film directors and get a better understanding of their best and worse films than a blanket statement that some are all bad. When you’re given short shooting schedules and small budgets, any film is likely to suffer.

You will learn a lot from this book and the photos make a decent reason to give it a look. 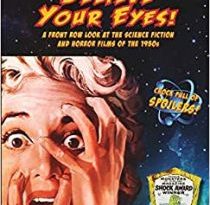