Imagine, if you will, a world where death no longer exists in its natural form. You can no longer just get old or sick or get into an accident or commit suicide to die. In this world, in order to die you must be gleaned by a professional Scythe. These are a necessary evil in this world who decide who should be permanently removed from the planet in order to keep population size under control. Wondering what happens if you get into an accident and ‘die’?

You’re brought back to carry on your life until a Scythe decides otherwise. Into this world of Scythes step Citra and Rowan, two newly selected trainee Scythes who now have to learn the art of gleaning a human being. As you can imagine, they’re not happy about their new career path. They’re even less happy when they realise they’re in competition with each other and one will eventually have to glean the other. 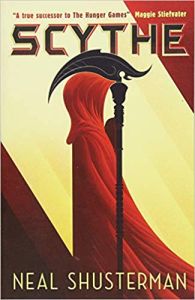 I found this whole concept of not being able to die an interesting one as I’m very interested in death and dying as a concept. The fact that you simply cannot die unless you’re actively killed was really fascinating. Especially when I read that if you think you’re starting to look a little old in this world, you can do what’s called ‘turn the corner’ and be genetically reset back to any age above 21. So technically you could end up looking older than your grandfather. I’ll leave you think about that for a minute. I’d really love to read more about this aspect and I’m hoping we learn more in further books.

The methods the different Scythes use to decide who to glean was really interesting, too. It got me to thinking about how I would make that choice if I had to. Some of the Scythes worked out the statistics of it all, so people who would have died at a certain age in the Age Of Mortality (the time when people died naturally) would be gleaned at that age. So if 3 out of every 1000 people who died naturally were teens in road traffic accidents then that’s the percentage of teens of driving age you would kill. Each Scythe has a certain amount of people they must glean each quarter to ensure that the population doesn’t get out of control. As to how they decide who to glean, it’s up to them.

There were a lot of interesting questions posed in this book alongside the obvious one of who should be gleaned. For example, some of the Scythes decided that they must give something up in order to be a Scythe. So some might decide never to speak again, some might give up their favourite hobby or food.

This is because Scythes in this world are treated a lot like celebrities in our world. They get given the best of everything in the hope that they won’t glean you or your family. Another question is if we’re all now immortal, are we still in essence human? Does immortality in some way change us at a fundamental level? Given we now have all the time in the world, theoretically, do we still feel the need to achieve things as we did when we had a finite lifespan?

I’ve spoken so much about the concepts in the book and I haven’t even got to the characters or the plot. To be honest, I think its best that you go in blind with regards both these elements as I really don’t want to spoil all the plot twists you’re going to read. Just know that you will be taken on a bit of an emotional roller coaster, especially with Rowan.

Honestly, I could go on about this book for ages! I really loved it and I’m hoping I’ll love book two and three just as much. If, however, you find it’s not to your taste you can easily stop after book one with no big cliff-hangers.