When I saw this in the SFCrowsnest list of unclaimed review copies, it immediately struck me as something I might like. I’ve always been a fan of stories that combine detective fiction with the supernatural. Having said that, I generally prefer the supernatural element to not be too common.

Worlds that have every sort of mythological being you ever heard of somehow living secretly, side by side with humanity are not generally my favourite settings but, occasionally, I find an author who somehow gets away with it. 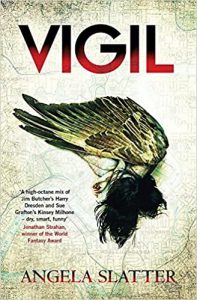 Those assorted supernatural beings are referred to as ‘The Weyrd’. This is another thing I don’t generally like, giving something/someone a name which is more or less a variant spelling of a word that sort of describes them. It’s been done to death over the decades and I really wish people wouldn’t keep doing it.

Verity Fassbinder is half-human and half-Weyrd. She walks both worlds, while not quite fitting comfortably in either. This, along with a painful leg injury, may explain why she is generally quite bad-tempered and sarcastic. She works for the Weyrd Council of Five in their efforts to keep the hidden world hidden for the benefit of all. This often brings her into contact with Detective Inspector Rhonda McIntyre. She’s in charge of the division of the Brisbane police force that deals with the weird/Weyrd stuff. Thankfully, they’re friends…sort of.

An accord has been reached between the Weyrd and the ‘Normals’ in the know that, in return for not regarding humans as a delicacy, they will be allowed to exist in peace. Naturally, there are some so set in their ways that they fail to follow this edict. It more often than not falls to Verity to investigate and put a stop to them, along with her ex, Zvezdomir ‘Bela’ Tepes. I rather liked the way Slatter avoids nailing down exactly what species of Weyrd Bela is, but he appears to be some sort of psychic vampire. To help cope with her injury, she has been provided with Ziggi, who serves as her driver and has a third eye in the back of his head.

Verity also has a past…what fictional investigator doesn’t? Her father, Grigor, was one of the very nasty Weyrd she was involved in bringing down. So, the set-up is something of a mash-up of elements in the ‘True Blood’, ‘Lost Girl’ and ‘Prodigal Son’ TV shows. I rather liked the fact that author Angela Slatter chose not to start with Verity’s first adventure, allowing her past to be mined as and when it becomes relevant to the current story. I suspect this will continue through the subsequent volumes.

Where this becomes far more interesting than many such urban fantasies is in the writing. It’s very much constructed as a crime novel, well thought out with a gradual building up of clues that eventually make some sort of sense. The initial case itself is a fairly nasty one, involving the disappearance of children, which has certain connections to her father’s crimes. I feel it wouldn’t have worked nearly so well had the supernatural element been allowed to dominate the story over the crime plot. The Brisbane setting makes for an interesting variation in location. Slatter has a very readable style, with a wry humour that perfectly balances the tension.

When I wrote ‘the initial case’ above, I was not simply referring to this being the one covered by this particular book, ‘Vigil’, in the series. Another strength of this novel is that Verity actually has three cases to work on, all at the same time. Each one comes with pressure brought to bear from those who insist that the situation which happens to affect them personally is by far the most important. A lesser writer could have made three separate books out of this. It will come as little surprise to regular fans of crime fiction that there turns out to be some links between the cases, but Slatter is again subtle enough to have them intersect, rather than being individual parts of the same investigation.

Despite my initial reservations, I found this to be a page-turner of a novel, which left me rather pleased to have the follow up, ‘Corpse Light’, already in my to-be-read/reviewed pile. The cover art, by Rory Kee is also very nice. 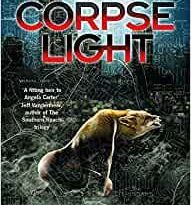