After you’ve watched the Channel 4 TV two series ‘Utopia’ on DVD, the first thing you want to do, apart from looking for Jessica Hyde and Mr. Rabbit, is to see if you can get hold of the incredible soundtrack of series 1. Released in 2013 and, yes, it is still out there waiting to wrap its claws around you. 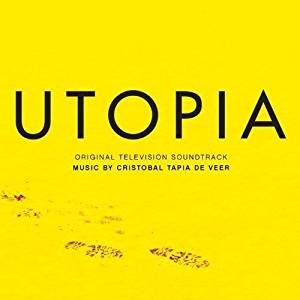 Cristobal Tapia De Veer is invited to come across from Montreal to the UK bringing only a laptop and a small box containing a dried rhino turd and a human femur and ideas what to do with the soundtrack for ‘Utopia’. These literally had to be thrown out, love to hear the original ideas, when the cues didn’t match the rushes and he rewrote from scratch according to director Marc Munden in the illustrated booklet.

I should point out that several of the tracks include cast vocals from the erise at the beginning of some tracks but I’m not going to tell you which. I mean, you want to be creeped out, don’t you? Play it on a proper CD stereo to get the full benefits of the bass which gets deep into your soul and won’t let you go. Track 14 even has a touch of electronic reggae about it. The rest is all inventive electronic music with a lot of emphasis to beat you into submission, as it did in the series. I should point out that the music for the second season in green of ‘Utopia’ appears to only be on vinyl.

None of these are short musical cues and at 76 minutes you get the full impact of Cris De Veer’s music and your life will never be the same again,

Don’t breathe the gas. It’s a real killer and, no, I’m not Mr. Rabbit but I need to find Jessica Hyde. It’s really important. Don’t forget to scream. 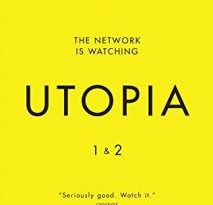