This version of the Titans depends more on the 1970s version than the 1960s, although with the brief early inclusion of the Hawk (actor Alan Ritchson) and the Dove (actress Mika Kelly) for one episode does suggest an earlier past grouping. It doesn’t quite follow the Wolfman/Perez version. Rachel Roth aka Raven (actress Teagan Croft) is much younger 14 year-old and fleeing after her ‘mother’ is killed but not sure from what when her telekinetic powers flare up. Dick Grayson (actor Brenton Thwaites) has split from Batman for a year and trying to make a career as a police detective, occasionally wearing his updated Robin suit when he needs to do something a little more masked although resents how violent he is in that identity.

He ultimately rescues Rachel and although he sees her as a hinderance tries to place her somewhere safe. Into this mix comes a super-powerful but amnesic Kory Anders/Starfire (actress Anna Diop) who also wants to keep Rachel safe as well. Into the mix we briefly have the Doom Patrol and Garfield Logan/Beast Boy (actor Ryan Potter) joins them. 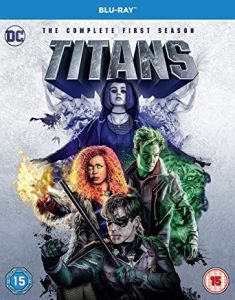 There is a lot going on here that is total spoiler but plays off their own failures in life. You can tell when characters are going bad with the running mascara around their eyes. There’s also a lot of under-story going on that has yet to have many reveals. I mean, something must be going on if someone as powerful as Starfire can be given amnesia.

The season was being stretched out towards the end of the season when there was a stop in the action at a vital point to go over Hawk and Dove’s origin, no super-powers here, which must have left viewers wondering what was going on.

Let’s have a look at the extras, some 40 minutes long by estimate. 14 of them, mostly about 2 minutes snippets long which doesn’t give much to comment on. The longest being the first, ‘Raven And Robin: Dark Rebirth’, at 8 minutes showing the dark connection between the two characters. Something I hadn’t realised was the Doom Patrol appeared here first before their own series and explains why the Chief was played by a different actor, Bruno Bitchir, than Timothy Dalton. Co-producer/writer Geoff Johns makes a good point that other than Robin, none of the other characters have been done live before.

The series is really one long story with the odd breakaway as it gathers up the team and showing there were previous connections while at the same time not contradicting anything else that is going on in the film/TV DC Universe. The various villains do make for some serious opposition, especially the Nuclear Family, although they could be seen as being instantly expendable and replaceable.

It’s certainly watchable and ‘Titans’ is certainly more character-led. Quite how non-comicbook fans will make of that or even some of the changes from its source, although as its reaching into its third season and the blu-ray/DVD release lagging behind remains to be seen.