Who fears her the most? Those she’s been asked to protect or the person she’s been asked to apprehend? Like the daughter of death that she represented, she stalked through the streets unfearing in the poor light. Late in the evening, other than herself, only the drunks and the prossies, looking for a hook, patrolled the streets. Them and the stone killer she was told to catch. She was told that this killer could not be killed but no one knew what she could do.

She’d been hired a couple days ago to solve the mystery of the petrified women. She’s seen it in the papers but dismissed it as paper hype. Nevertheless, money talked and paid for her to go and see them in the police yard. A shelter had been placed over them. Each of the women were stone but their clothes was still fabric. The position of the clothes would have been impossible to dress that way. Ergo, something odd was going on.

She studied their clothes and faces. Ladies of the night, so at least they wouldn’t be carrying identification. Whether this was worse than the mutilations murderer out there would be hard to say. The peelers didn’t see this as murder but they didn’t know what to make of them. Where there were eight, more would follow. It was more a case of finding their haunts and see what they had in common other than trade. Someone had really stopped them in their tracks.

Of course, it could be a mad sculptor and equally mad seamstress but that didn’t explain why they were left where they were and their expressions. A mixture of surprise and horror which meant eye contact. A real sculptor that good would surely have had gallery showings. Maybe it was a stunt for a future gallery display.

There was no evidence for any of that so it meant haunting the streets late at night. Her top hat and long coat might suggest a man in silhouette and that was enough of a disguise. She might even discover the mutilations murderer. It seems the streets of London were awash with killers. There was someone she knew who could find anyone but she couldn’t find her. Some detective she was. Still, it was the only thing she could do for now.

There was no indication when these eight women were petrified. One had been found by accident. The others more obvious as if they were meant to be found. Maybe whoever was doing this didn’t see any point in hiding them but the weight alone would have been prohibitive moving them without someone spotting the activity. More like a signal than wanton murder. Then again, the same could also be said of the mutilations murderer, only his was a different message, he just liked chopping up people. Clearly not the same person. If it was a message, then to who? 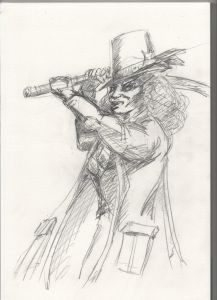 The Baroness found the ninth statue in the middle of a side street. Frozen in mid-pose in surprise as if whoever did it waited until she saw who it was. She gently touched the face, Not warm. Cold like marble or death. Not heat loss. It must have been done quickly and recently as the clothes still had a residue of warmth.

There was a noise and someone dropped from the roof above. The man was dressed in a dark suit and long coat, with touches of a frilled shirt showing through the cuffs. He pulled a hat from a pocket, flipping it into a top hat before putting it on.

‘Whose ah youse?’ She inched her hand inside her coat, feeling for her sword.

‘I’m well aware of your reputation with a sword, Baroness. I think we’re after the same person.’

One of the Gorgons. When reality shifted, Stheno returned to normal and escaped without looking at the mirrored walls.’

‘The Gorgons aren’t immune to their own ability. She can petrify herself…as well as others.’

‘Do you remember anything, Baroness?’

‘Let’s leave the statue to the police. They’re collecting the set. We can talk somewhere else a little more private and I need to jog your memory as to what I am. I don’t think either of us have any answers for them as to what is going on.’

‘Maybe not tonight but we can still look and she won’t stay here. Her message hasn’t got through yet. Depends on how many other women are out there tonight. She hasn’t petrified any men yet.’

‘What do you remember? You’re a consultant.’

‘You do realise this isn’t our reality. Somehow we’re in an alternative reality?’

‘You haven’t lost your talent to body jump?’

‘You stopped asking what I am.’

‘My name is Fernfaire,’ the Vampiri raised his hand, showing a nail piercing his small finger. ‘You can remember nothing else?’

‘Your owl Damballa? The grave of your mother and brother?’

The Baroness stopped and, after a few moments, shook her head.

‘As far as I know, they haven’t gotten out and Blanks were sent to the crossroads but don’t know what they’re guarding.’

Fernfaire shrugged. ‘I don’t know what to believe. I haven’t seen any of my own people.’

‘I did meet another of the consultants. She let me feed a little, providing I looked for the rest of you. All the Psionics she’s directed have vanished. She thinks I might be under this Max’s radar. A major talent compared to Mary Travers. Then this came up and I figured one of you might investigate.’ He paused. ‘None of those names mean anything to you?’

‘Wrong Max. Maxine was your Blank?’

Fernfaire flicked the air. ‘You’d have to see one to understand. Let’s say they’re jump-proof. Not in the same way you’d jump me if you could. OK, let’s stop here.’

Under a gaslight, he pulled out a map and added another ‘X’ to it.

‘It might not even be the statues that is important. Maybe it’s the pattern or whoever it is isn’t straying far from their hideaway. An open clue.’

‘No controls of dis stoning?’

Fernfaire shrugged, ‘We’ve never got close enough to find out without some protection.’

‘We’re pretty fast ourselves. Two are better than one.’

‘The order of them made doesn’t make sense of that.’

‘She’s also been upping the number stoned a night but that might be down to luck.’

‘Better get a move on. It’ll be light soon.’

Fernfaire led as they went down a lane and crossed to another road and then halted. In the poor gaslight across the road, a lady of the night was dawdling. Did she think she would get a tom down here? There was a movement in the shadows from different directions. She wasn’t alone. Maybe she had chosen a good spot. Were they going to lucky the first time out?

The Vampiri stepped out and walked towards the woman. From the shadows across the opposite street, another women emerged and then another from a different direction. A possible trap.

‘Dat wimen has ma clothes, Fernfaire,’ the first woman pointed back the way he came.

‘And face. She’s a Pattern. I told you about them. Can you stop her? Now would be useful.’

The new woman stared at the other Baroness who suddenly froze as another woman from an adjacent street also stepped out.

Fernfaire reached for her, thinking she would fall but the Baroness stayed upright. The other four women were suddenly locked in a dance around them both. Back in Haiti, this would have seemed like their ritual dance. Gently, he brought her body down to kneeling height.

The four women stopped dancing and then instantly froze, petrifying quickly to stone as they looked at each other.

‘Which one did it?’ he asked as they slowly got up and inspected the statues.

The real Libertine Rush shrugged, pulling her own top hat from inside her coat and putting it on.

‘She doesn’t. This one does. Ncario. An old Pattern from a generation that could acquire the abilities of those she’d copied. Probably wanted to contact her own people. Must have survived by being petrified herself for so long. Now this one is Stheno. If Euryale is out there, then she isn’t one of these. She might be a Pattern slave providing them with endless children like Medea was once forced to do.’

‘Pattern I think. Our helper to find them all is late. We ought to go looking for her. She might have found that other killer out there.’

There was a movement and another woman stepped out into the gaslight. This time wearing an urchin’s garb of a brown suit over a white shirt and wearing a flat cap.

‘Eh, Doc, this don’t look like Albuquerque to me. We got a Pattern convention? If we haven’t, I’m going to get seriously stoned. None of them called “Steve” unless they’re called “Stephanie”. Maybe the “Steve” behind me but he’s a real killer.’

The real Libertine threw her sword and the man behind Scobie dropped to the ground dead. She walked over and picked up her sword, wiping its blood off on his coat. The dead man had a cleaver in his hand.

‘That I suppose is the mutilations murderer. The lady is Flanolla Scobie, one of your Stable mates. Often called Flamin’ on account of the chaos she creates bringing people together.’

‘I found her a few days ago. She sounds odder than ever. I think she thinks she’s a rabbit than an Alice. If this was a real Victoria era, she’s have probably found Jack the Ripper as well.’

‘We have a result. Better than I hoped. One can even pass for you. Let the police look after them for now. We need to go and hope Max thinks you’re out of the way and doesn’t attack you again.’

‘Not here. How would we explain this to the rozzers? ’