Varèse Sarabande released AMC’s ‘Into The Badlands: Season 1 – Original Series Soundtrack’ by David Shephard in 2018. For those not familiar with the series it is a dystopian adventure set in a feudal future world where firearms are banned, and martial arts prevail. There’s also an element of magic thrown in for good measure, too. I can say this as I took the unusual step of listening to the soundtrack a few times, watching the first episode from series 1 of ‘Into the Badlands’ and then listening to the soundtrack again. I’m going to watch the second episode when I get chance.

Before I get sidetracked with the on-screen activities lets discuss the CD of the soundtrack. It’s composed by Dave Shephard, who has worked on many different TV and film soundtracks. The most prominent ones I picked out from the back catalogue were ‘Ghost Rider’ and ‘Spider-Man 3’ but there are lots of others. The album contains 26 tracks with a combined play time of 51 minutes or so I’m told. I checked and its 50 minutes 46 seconds so there’s been a bit of rounding up going on by the marketing department.

In the press material accompanying the soundtrack Dave Shephard says, ‘In the score there are taiko drums, distorted guitars, distorted strings, dark moody pads, ethnic instruments from around the globe, and obscure, native wind instruments.’ Shephard continued. ‘These are all combined with modern recording studio effects with the intent of bringing dystopia and futurism together in sound.’ Let’s see if Shephard’s description fits the CD’s contents. 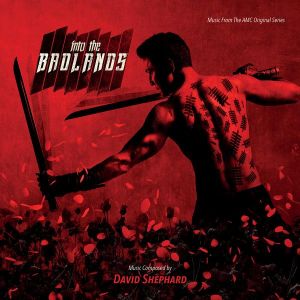 Things get underway with track 1, ‘Into The Badlands Theme’ performed by Warrior Blade. It is only 39 seconds long but gives a nice introduction into the rest of the soundtrack while ticking all the right boxes. It does stop suddenly with no fading out but track 2, ‘The Greatest Clipper In The Badlands’ quickly takes over. This is one of the longer tracks at 2 minutes and 4 seconds. The majority of the tracks are under 2 minutes long and 3 of them don’t even get to a minute.

The exception to the short tracks is number 8, ‘Abbot Fight’ at a whopping 6 minutes and 56 seconds. Mind you it contains a number of different styles and tempo changes. It’s amazing what you can do in nearly 7 minutes. In other soundtracks I have reviewed, I have complained that having such short tracks usually means that there isn’t enough material to make a lasting impression on you. It’s not the case here as I can and do remember the shorter tracks.

This isn’t a traditional orchestration neither. Shephard has unconventional instrumentation which mirrors an unconventional world portrayed in the series. The majority and possibly all of the tracks do have a drumbeat though. Some tracks have a high tempo beat while others have a more sombre feel to them. Track 4, ‘Quinn Address The Boys’ has both as it starts slow and foreboding before picking up the beat to become fast and foreboding.

Track 8, ‘Abbot Fight’ is one of those tracks which has bits of everything in it. Slow bits, fast bits, loud and soft. It does stand out due to the variety of styles employed and sound effects used. In other reviews I might have said instruments but, for this CD, I think sound effects is a better description.

For those of you who like soundtracks I think this would be a worthy addition to your collection. It is strangely easy to listen to. I’ve probably listened to this soundtrack more than any of the others I have reviewed. That has to be a recommendation of sorts.

Into The Badlands: Season 1 – Original Series Soundtrack. by Dave Shephard.