When I first saw the title of this book, I did a double-take: ‘The Military Science Of Star Wars’ by George Beahm. The what now? ‘Star Wars’ is a fantasy, it doesn’t even stretch to becoming Science Fiction often, a Campbell and Tolkien rip-off that tapped into a cultural need when the world needed it most and that hadn’t, until recently, looked back. However Beahm clearly thinks that one can draw parallels between military science and the ‘Star Wars’ movies, to be clear he means things like Personnel, Weapons, Tactics and Strategy. 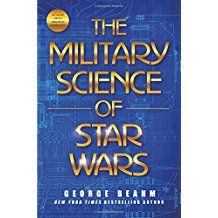 Let’s take Weapons for instance. Beahm points out that in ‘A New Hope’ both Obi-Wan Kenobi and Han Solo have a conversation about their preferred weapon, it’s a lightsaber for Obi and a blaster for Han. One is old, the other current. Beahm then gives us a potted history of US army firearms from flintlocks to the retiring Beretta M9 pistol to the more modern SIG Sauer Model P320, This then, in turn, becomes a discussion about futuristic smart weapons. The next chapter exposes us to the lightsaber and its relevance to the samurai and warriors in feudal Japan.

Being an ex Army Major, Beahm certainly knows his weapons and his military history and pairing them-up with their ‘Star Wars’ equivalents is deftly handled. It is, however, not clear what the objective of all of this discussion might be, if perhaps only to give you a history lesson and let you ponder on the applications of our own warfare a long time ago in a galaxy, far, far away. As you might imagine, this sort of comparative writing works better with one type of movie than another, Beahm cites ‘Rogue One’ as being of the most militaristic value, probably because, well, ‘Rogue One’ was written as an actual war movie.

There was one battle I was itching to read about, though, the best one in the whole franchise in terms of spectacle, the assault on Hoth in ‘The Empire Strikes Back’. Beahm points out that while the Rebels are routed, the Empire fails to capitalise on what he calls its use of ‘combined arms’. The Imperial Navy has to stop the Rebel ships getting away and the Imperial Army has to take out the Ion Cannon and its power generator, aiding that escape. Beahm feels the Imperial Command were wrong to attempt a ground assault. It’s worth noting that Beahm thinks this decision gets made on the Death Star, which was destroyed in the previous movie, it’s actually Vader’s command Star Destroyer, the Executor, so Beahm knows his military history, but his ‘Star Wars’ recall is a bit lacking. In Beahm’s opinion, the Empire should have used TIE fighters and bombers to crush Echo Base and then land ground troops much closer to it. Which is sound, but would have robbed us of the spectacle of the AT-ATs.

Overall, I found ‘The Military Science Of Star Wars’ to be an interesting and diverting read, but only to the extent that you may or may not take the battles in the series seriously. Equally, I enjoyed learning about the thinking behind current US military approaches and it did help ground a lot of the strategic discussion, which was useful.

My favourite quote about the military objectives in ‘Star Wars’ come from Danny Dyer’s stoner Moff in the 90s clubbing movie ‘Human Traffic’. Holding a bong and clearly out of his gourd, Moff triumphantly announces to the room his sudden realisation, ‘The Emperor wants to control Outer Space. Yoda wants to control Inner Space.’ Couldn’t have put it better myself really.