‘Beneath The Sugar Sky’ is book three in the ‘Wayward Children’ series by Seanan McGuire. Please don’t read this review without having read the first books in the series, ‘Every Heart A Doorway’ and ‘Down Among The Sticks And Bones’, as it may contain spoilers. 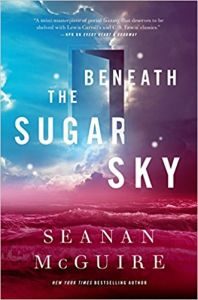 We begin with Cora, a new girl to Eleanor West’s Home for Wayward Children. Cora is finding it hard being back in this world having previously been in a water world that, as tradition dictates, was perfect for her. In our world, she is seen as fat and this is not something she enjoys. In the water world, this was useful to her in order to survive and her swimming skills were some of the best in that world. Cora is drawn to the one body of water nearby, the turtle pond behind the school. Unfortunately, another child called Rini chooses that moment to fall from her world into the pool wearing nothing but a sugar dress. Rini needs help to find her mother before she completely fails to exist in any world, so the pupils in the school start on another quest.

I feel so sorry for everyone in this school as they all just want to go back to the worlds that were in essence created for them alone. Here, they just don’t fit in and constantly yearn for their perfect worlds. Even Miss West, who has been away from her world for decades, and I can’t imagine how that would feel. The only person who really doesn’t want to go back is Kade, who happens to be one of my favourite characters and when he explains the difference between a vulva and a vagina, it made me smile. Everyone should read this book purely to learn that distinction.

We’re introduced to some new magics in this book, some of which I really wasn’t sure about. I like that the rulers of the different worlds have some power over who is allowed in or gets kicked out, but I wasn’t really sure I liked that power being given to one of the people actually moving between worlds. I preferred when the movement between worlds from the point of view of the person involved was far more random, but I did enjoy finding out how some of the worlds were created and I’d love to learn more about this please.

I really enjoyed seeing the characters in this book going into worlds that were not their own other than our world. They get to go to a world made entirely of confectionary, so the floor is made of crumbled cookies, etc. Think of the room made of candy in ‘Willie Wonka’ and you’re there pretty much, apart from the fact that this world has even fewer rules. It was really funny to hear Rini trying to explain how everything works to the other characters and them just not getting it, but they had to believe in it or they would be rejected from the world. I have to say that I found the confection world was starting to make my teeth ache and my skin feel sticky after a few chapters.

We also got a little more background to the worlds and learnt that people are born in these other worlds in the same way people are born in our world. Sometimes, one of the people born into a different world to ours is taken and maybe brought here because this world is perfect for them. For some reason, I hadn’t thought of this before and it slightly blew my mind for a few pages. That and the information regarding how the worlds link together also felt like something that should have been obvious to me but I’m glad Seanan McGuire put it into the book just to make things clear.

As usual in a book from this series, we get to see lots of representation of different types of people. We have those from the original cast who have different sexual orientations but, in this one, we get to see Cora and how her weight really affected her life before going to her world. It was wonderful to see how she fitted into the school as everyone there is different so her weight meant nothing to them when there are people with magical bone flutes that can raise bones from the ground.

I love how Seanan McGuire weaves other stories into her books like fairy tales such as the Pied Piper. She makes them feel as though even though they’re fairy tales here doesn’t mean they aren’t true in another world, maybe they were brought over as stories when other children moved between worlds.

Overall, I enjoyed this book and feel it added a lot to the series but it wasn’t my favourite so far. It’s still a highly rated book and one I think everyone should read, along with the whole series, but other books stood out more for me. I can’t wait to read the next one in the series! 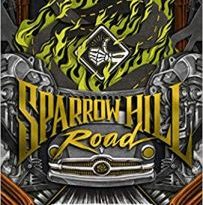 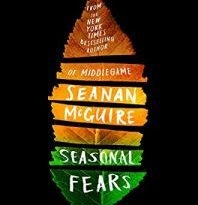 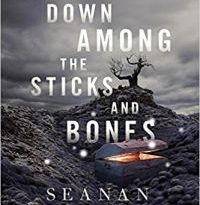 Down Among The Sticks And Bones (book 2) by Seanan McGuire (book review).