As you can tell from the title, ‘The 10c War: Comic Books, Propaganda And World War II’, this book sets out to explore comicbooks in World War 2 where even super-heroes stepped in and helped the war effort. As light reads, comics were also popular amongst the armed forces and carried in their backpacks. The information shown points out that the readership 70% were male and 30% female overall. It would therefore hardly be surprising that there were a percentage of super-heroines out there as well. I would correct Christina A. Knopf on that point as I doubt if many male readers bought them unless they wanted to be regarded as being sissy. I was also quite surprised by how many there actually were beyond National’s Wonder Woman and Timely’s Miss America. I would also like to correct a detail about Derek ‘Dez’ Skinn’s profession as he isn’t an artist but a publisher/editor. 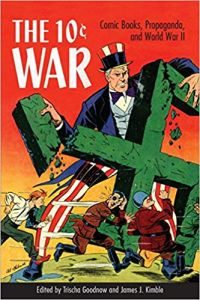 I was aware that the Flying Tigers was a John Wayne 1942 film but not that it extended into comicbooks and Zou Yizheng’s piece on them and the associated stereotyping with their Chinese colleagues as they flew against the Japanese. It did make me ponder on how stereotypes might not have been helped by comicbooks but they helped the embellishment of certain looks. The artists who drew that way also knew that it made for instant identification but not the later consequence.

Jon Judy and Brad Palmer’s piece on sidekicks and how they were happy to go to war was also insightful. I suspect though it just was wish fulfilment for kids playing on the streets than enlistment. Patriotism starts at home after all.

I wasn’t really aware of how the composite of Uncle Sam came about before but Travis Cox explains it was a cross between a meat packer and Abe Lincoln although there is more detail here. In many respects, Uncle Sam was National Periodicals answer to Timely’s Captain America with a need for a patriotic hero. MLJ’s character of the time, the Shield is mentioned but not actually covered here. It would have been interesting to see some comparison made of all three of them.

With Superman’s real name, Tricia Goodnow points out the Jewish connection of Kar-el but there is an oddity that originally it was Kar-L, even if it was ultimately the name of the Earth-2 version. I doubt if either Siegel and Shuster had even considered the connection when creating his name as a lot of the time, names are chosen because they sound or look right. I’d never considered the political connection of Frank Baum’s ‘Wizard Of Oz’ to the USA before which was something of a allegorical mind-opener.

The look at Wonder Woman’s lasso of truth as being seen as a torturous weapon by Elliott Sawyer and Derek Buescher is something I’m less sure about. If anything, it’s just a device of willing obedience as long as it’s worn with little in the way of coercion. You’re entranced not in agony.

Steven E. Martin’s look at Hitler gives a rather honest assessment on how he inflamed and manipulated his countrymen against the Jews in a scary interpretation that makes his chapter worth reading. Rallying people by distorting or misinterpreting ‘truth’ seems to be making something of a comeback today.

I haven’t really seen any of Novelty Press’ comicbooks before. Apart from tending to steer away from any super-heroes, their desire to do ‘normal’ stories but everyday folk, chiefly kids, seeped into the war effort, encouraging their readers into buying war stamps and war bonds to fund the war that would one day be redeemed. Seeing the picture with a line about buying might not be subliminal but seeing it on a regular basis had to sink in. Ironically, the collecting of used paper no doubt contributed to a loss of comicbooks from this time period. Interestingly, their editor kept up a dialogue with their readers and their letters. It is a shame that some of their more adverse stories was left in the footnotes as if writer David E. Wilt was keeping with the sugar-coating.

The list on page 224 shows the 8 comicbook companies and percentage of war-orientated covers they had during the period and it isn’t as many as you would think, even if they made the biggest impression. Mind you, I think that might be because of the war-time interest ignoring the non-war covers so they stood out more. What is ignored is how the number of comicbooks available was cut back during the war through lack of paper and many of their creators being in the forces at the time.

I was quite surprised at how much I learnt from this book. The couple mistakes I found are outweighed by how much these authors revealed. The fact that some of my thinking came out writing this review is also a measure of interest. If you want some insight into American comicbooks in World War Two then this book is worth a read.