At the opening of ‘The Martian Simulacra: A Sherlock Holmes Mystery,’ it’s 1907 and Doctor Watson is having breakfast with his old friend Sherlock. Ten years earlier, the Martians returned to Earth, vaccinated against those microbes which had killed them the first time. But they were nice! It turned out that the first invasion was by a nasty faction that had temporarily taken over the government. Now they have set up peaceful embassies and share some of their wondrous science with humanity. Bless! 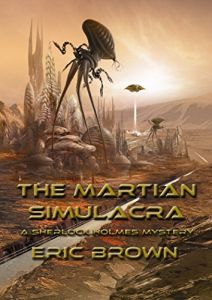 Suddenly a tripod looms over Baker Street! The Martian ambassador Gravlax-Xenxa-Schmee is coming to consult Holmes, who helped them out years ago on another case. Holmes has learned Martian and spends a lot of time studying the Encyclopaedia Martiannica to expand his knowledge. The ambassador manages to squeeze his tentacled, slimy form into the sitting room and enjoys a cup of Earl Grey while he explains his problem. Back on Mars, someone has murdered esteemed philosopher Delph-Smanx-Arapna, perhaps because of his controversial views. Gravlax-Xenxa-Schmee wants Holmes and Watson to come to Mars and solve the mystery. So begins another great adventure.

The narrator is Doctor Watson, a widower now and Holmes teases him about finding another woman. As it happens, he meets an attractive blonde in Hyde Park while listening to a pair of famous writers broadcasting their anti-Martian opinions at Speaker’s Corner. Then she turns up as a stewardess on the rocket to Mars. Is there more to Freya Hadfield-Bell than meets the eye? Yes.

‘The Martian Simulacra’ is a planetary romance, an old-fashioned tale of derring-do with tentacled aliens set on the lovely Mars we used to have before NASA spoiled it all with facts. Author Eric Brown gets the tone and vocabulary of Doctor Watson’s narration just right. Guest appearances by other luminaries of the day, both real and fictional, give the story added verisimilitude and the fast pace is suitable for a ripping yarn of this type. Cleverly, passengers are sedated for the week-long journey to Mars so they conk out just after take-off and wake on arrival, saving both them and the reader a tedious interlude. Verily, there’s not a tedious page in the book which is a real page-turner. My only tiny, teeny-weeny quibble is that Holmes doesn’t do a lot to help himself in the story and is instead carried along by events but I guess even the most masterful can get out of their depth in a strange new world.

‘The Martian Simulacra’ is part of a four-novella set from Newcon Press but can be read independently. Only the most solemn stuffed shirt churl would not enjoy it for the bit of fun it’s meant to be.