When an author dies with a book unfinished there is always an issue: should someone else complete it or should it be left unpublished. Perhaps the extant work should be issued with any notes pertaining to it. One of the best known unfinished novels is ‘The Mystery Of Edwin Drood’ by Charles Dickins which has had many attempts to complete or transform it. J.R.R. Tolkien’s ‘Silmarillion’ was completed by his son using the many notes left behind.

Terry Pratchett was adamant that no-one continued writing in his ‘Discworld’ so instructed all his notes to be destroyed after his death. Anne McCaffrey began to train up her successor for the Pern novels but her son, Todd, wasn’t able to capture the ambience that had endeared his mother to her followers. When David Gemmell died, his wife, Stella, undertook the completion of the final novel of his ‘Troy’ trilogy. She did a good job and has since gone on to write original novels of her own. 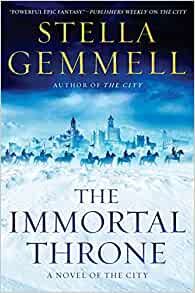 ‘The Immortal Throne’ is the sequel to ‘The City’. The area called The City is a misnomer as it is a large, sprawling area within high walls. There is a city at the centre but there is also extensive farmland and resembles a small country in its own right. The rulers are extrEmly long-lived, enough to be almost considered immortal and are known as Seraphim. The City is at war with various tribes that live outside the walls and have been for centuries. In The City, there are only three Seraphim left: Areaon the current Emperor, Archange who was his wife and Marcellus the First Lord and leader of the armies. Loyalty is the quality that is most highly prized.

All children are conscripted into the army at the age of sixteen. Rubin knew that he would never make a soldier, unlike his sister, Indaro. To escape that fate, he ran away into the tunnels underneath The City. Extensive, they are the home of an underclass of criminals and the hopeless. The survival skills that Rubin learnt stood him in good stead when he finally emerged. He became a spy for Marcellus, infiltrating the enemy ranks.

When we consider history, most of the information that is passed down relates to the leaders of countries, armies, revolts; the people who are at the centre of events. There isn’t room in the history books for those who carry out the orders, make mistakes, fight and possibly die. Many of the characters in ‘The Immortal Throne’ are the ones who have been caught up in events. Rubin is one. Because of his knowledge of the countryside and speaking the language of the enemy, Marcellus sends him as messenger the direct route to another section of the army through enemy lines with the order to attack at dawn.

He is seriously injured in the ensuing battle but in the field hospital is Valla. She, too, has been injured leaving her with an arm that doesn’t function properly. She takes of the self-appointed task of nursing Rubin. In the heart of The City, Emly and her brother Elijah have been taken under the protection of Archange. While Elijah is happy to study, Emly flees with Evan, not realising that he has stolen the Gulon Veil, a magical item which is believed to keep the appearance of the Seraphim youthful.

In so many novels of this nature and it can be classified as Grimdark, the camp followers that trail any army are forgotten. Here, they play an essential part. Emly finds a place amongst the women, the wives, mothers and whores of the soldiers. There is a camaraderie amongst them and the troop which is detailed to look after them. The time given to this group is refreshing and the relationships relieves the tedium of a marching body of soldiers, men and women. It is the nature of war for there to be casualties. Expect them here. Not every character who shines will make it to the end of the book but that makes the situations they find themselves in more realistic.

While Stella Gemmell writes in the same genre as David Gemmell did, it would be unfair to compare them. Stella has a lighter touch with the female characters but in no way does she ever become sentimental. The situations they find themselves in are just as difficult as those of them men. Some cope, some don’t. The result is a fantasy that is enjoyable to read and Stella is making her own name as a writer.