When I first saw the cover of Steve Kaplan’s book, ‘The Comic Hero’s Journey’, the first impression was it had to do with comicbooks and the moustache and glasses was the disguise. Nope! It’s actually about writing comedy characters although Kaplan admits to being a comicbook fan. Maybe it would make sense in later editions to call it The Comedy Hero’s Journey’ instead. 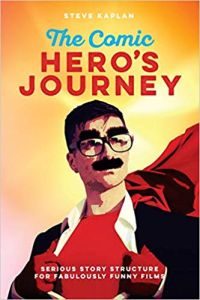 Don’t let this stop you reading this book if you’re not sure you can write comedy scripts or fiction. There’s a lot to learn and apply to drama situations as well in terms of creating contrasting characters than to all come from the same cloth. Indeed, Kaplan does this when he compares plot elements from the first ‘Star Wars’ and ‘Wizard Of Oz’ films to how it would be applied in comedy.

Those of you familiar with my own stories are aware that I can see some humour in most situations and apply it. A lot of writers can’t or are afraid to do that in their stories so understanding how the mechanism works should be added to your toolbox. As Kaplan points out, it all works out from having a flawed character who gets better throughout the story but not necessarily quite that good in the finale. It gives somewhere to go.

Seeing the archetypal characters will certainly make this book well-thumbed as you develop contrasts and combinations. Comedy relies on situation possibilities and Kaplan shows how, even at the idea stage, you can practically build up enough material to make a film or story. The important bit having a logical way to connect them all together.

Kaplan’s exploration that a story can only have one major lie or implausibility is the SF equivalent of having one major science fudge and then everything else has to be honest to the reader. Adjusting realities is standard fare for SF so you should be on home territory.

There is a lot to learn from this book in all types of genre and you will certainly learn the methodology. In some respects, I wish he’d looked at the straight character where the comedy character bounces off more. After all, you do have to wonder how such opposites stay together when they are so opposite.

Kaplan gives some views on his favourite American and British comedy films. I think he missed the best line in ‘Dr. Strangelove’ which is ‘Gentlemen, you can’t fight in here! This is the War Room.’ Some of his films, I’ve still to see but I have a life-time to play with.

Comedy does give insight into character and if you come away from this book with some understanding of that then you’ll have something else to develop. Don’t get too serious. Mind you, I’m still puzzling why Kaplan has two of his cats named after his websites. 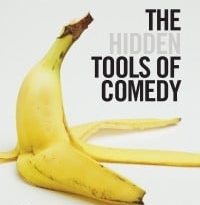 The Hidden Tools Of Comedy by Steve Kaplan (book review).

The Hidden Tools Of Comedy by Steve Kaplan (book review).