Considering how Network is working their way through the Gerry Anderson series, it was an interesting surprise to see ‘Space Precinct’ appear. I have to confess that I haven’t see it since its original release back in 1994, so was curious to see how it holds up compared to the CGI series of today. Oddly, the creature effects holds up better than the close-up vehicle effects but after a few episodes, normality crept in and I just accepted the reality. On analysis, I think it was the absence of people in those shots, although Steve Beggs did start including them in later episodes suggesting he knew it was an oversight.

The basic premise was, as the series title says, is having an alien police station on a satellite over Demeter City orbiting the planet Altor. The force consists of assorted species, include some humans. The latest of these is NYPD detective Patrick Brogan (actor Ted Shackleford) who is partnered with Officer Jack Haldane (actor Rob Youngblood) and sometimes Officer Jane Castle (actress Simone Bendix), who usually teams with Officer Took (actress Mary Woodvine). Identifying the people behind the masks is a lot harder as even some of them change their voices.

Actor Jerome Willis from ‘The Sandbaggers’ is Captain Rexton Podly. Interestingly, fellow co-star Bob Sherman appears in the 6th episode. Lou Hirsch, who plays Officer Romek goes on to be a regular on ‘My Hero’. There are a selection of human felons which should give you some fun testing if you can identify them and where else they’ve appeared. Actors Bert Kwok and Oliver Cotton were in the opening episode.

Oh, I wonder what happened to Idris Elba or the necessity to change his voice in his appearance here? I could have sworn that one of the voices in one episode was an uncredited David Graham sounding a bit like Gordon Tracy and a quick check confirms he did three episodes. In ‘Two Against The Rock’, three famous luminaries in actors Stephen Grief, Ray Winstone and an incredible performance by Danny Webb. There are a lot of good guest stars. 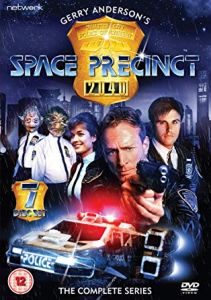 Picking out favourite episodes is always going to be tough. Certainly, ‘The Snake’ should be amongst these. The fifth episode in and the tension level of dealing with a scheming alien bomber still makes for great tension. Certainly, ‘Divided We Stand’ dealing with cloning and memory transfer is pure SF.

Be warned, the final two episodes are 82 minutes long so give yourself plenty of time to watch them because they are really good. In fact, I came away from watching this series quite happy to have watched it again. ‘Space Precinct’ holds up pretty well. There are some predictable aspects but all characters get a chance to shine which is important.

The extras are divided onto the last two disks. The ones for ‘Space Precinct’ are on the final disk, so I’ll focus on those first. ‘The Making Of Space Precinct’ runs at 25 minutes. I’m not sure if I agree with Gerry Anderson that this is the first TV series dealing with cops in space. BBC’s ‘Space Cops’ came out in 1987 after all. There’s also been films like ‘Outland’ in 1981. What is of interest from this extra is the behind-the-scenes look at alien mechanics, models, motion captures and green screen, all revolutionary for its time pre-CGI.

The ‘Space Precinct Creature Tests’ running at 17 minutes looks at the tests done with the actors in their mechanised masks being tested for movement with their eyes. It does look rather odd that Mary Woodvine as Officer Took isn’t paying attention but I suspect the mask does deprive her of much of her hearing and as pointed out in the previous extra, vision is also impaired. At the end, there is some test footage of the city set.

The 19 minute ‘Segments’ has material and interviews from ‘American Electric Circus’ and UK’s ‘Meridian Tonight’ amongst others on the Pinewood studio lot, meeting cast and production people and seeing behind the scenes. There is a little repetition. The 24 episodes cost $36 million with another $4 million spent on promotion and considered the most expensive SF series at the time. Contrary to IMdB, there wasn’t a second season. None of the key aliens were seen without their masks although Captain Rexton Podly does come to Earth for an interview.

There’s also the 4 minute original promo for the series. This was followed by something like 25 minutes of a non-stop Photo-Gallery, much of which is behind the scenes. You learn a lot about the various scales of the models and some of the flying cars from the series. Some of the guest aliens were shown without their ‘heads’ on but none of the regulars, no doubt to keep the reality up.

On the 5th disk, there is a bevy of things including and related to the original 1987 pilot as ‘Space Police’ with the episode called ‘Star Laws’. Here, Brogan is played by Shane Rimmer, running a police team consisting of feline telekinetics and I’m not quite sure what the other furry aliens were. Added to the mix, is Officer Cathy Costello (actress Catherine Chevalier) but what she is should be left for you to watch.

The basic plot is the local villain, actually called V.Lann, wants his team released from police custody and puts the life of the President literally on the line. Brogan has to get his team saving them and trying to locate Lann. It’s rather weird trying to work out when people are full size and not. The pace is a little stretched in the edit, even for that time period. It’s almost like they weren’t sure who would be their audience. This was also the last collaboration for Gerry Anderson and Christopher Burr as co-producers.

The 23 minute ‘Cutting Copy’ doesn’t appear too much different from the pilot episode until you realise that not all the sound effects are there and no music.

The 10 minute ‘Promo’ does make it easier to identify actor Ed Bishop doing the voice-over introduction and this is more ‘Space Precinct’ but four different actors playing the key roles. Of these, there is only one I could identify and that was Chloë Annett playing Castle. I looked that up and this was being used as a promo to sell the series and her dad was the director.

‘Space Police’ has its own ‘Image Gallery’ lasting 7 minutes or so. It’s rather interesting seeing the scale of some of the creatures and there is one photo showing the people inside the police heads.

There’s also a second or rather first, depending on which way you look at the extras on the last two disks, 40 minutes or so of ‘Space Precinct Image Gallery’. Covers merchandise, props, production, well, nearly everything, including the paperwork from police to organ donorship to Vinny’s election campaign. In some respects, I wish this was segmented better as it really is a massive undertaking watching this in sessions as long as the episodes. Someone really ought to do a ‘Making Of-‘ book on the subject. I was certainly surprised at how much merchandise there was out there and a quick check shows much of it still available. As I commented previously, you do have to wonder who their target audience was and just have to say ‘family viewing’.

As commented above, I was suitably impressed with ‘Space Precinct’. This is a massive viewing feast and certainly not dull. You almost want to visit Demeter City, except for the crime rate and the risk of crashing air vehicles. On reflection, that is one very good reason not to have them in our reality as this would be very dangerous. If you missed it the first time by not being born, then you’re in for a treat. As Brogan’s daughter Liz would say, ‘Massive’.