The thing you first notice about ‘The Beam: Season 1’ is the format. It is set out very much as a scheduled TV program might be as it uses episodes rather than part I, part II, etc. There are six episodes in this first series and each episode is self-contained but drives the stories forward. I say stories here as there a quite a few characters each with their own story. Some are interlinked but not all of them are. An episode may be between 7 and 13 chapters. 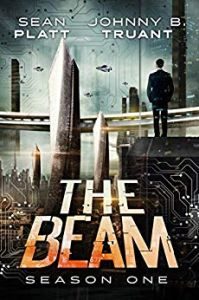 Let’s have a look at the universe the Beam is set in. Firstly, it’s set in the North American continent in the near future, 2055 onwards. What was left of Canada, the USA and Mexico have joined together as the North American Union after the environmental disaster of global warming triggered a collapse in the old countries with some serious armed conflicts erupting. That this new state endured and flourished is down to their technical superiority.

The political environment is a twist on the current USA model of a two-party state. In the future, we have Enterprise or Directorate. Enterprise rewards effort and creativity and you will either prosper or starve while the Directorate provides guaranteed income, but you are unlikely to advance above your current role. The general population can choose to shift from one party to the other at predetermined ‘shifts’ which happen every six years.

Underpinning the highly technical environment is the Beam. This is a third iteration of the Internet we know and love today. The almost mythical Noah West first built the second iteration called Cross Brace before finally devising its successor which he called the Beam. It is extremely powerful and populated with a few AIs. It is also everywhere with walls, tables, desks and just about anything being capable of becoming a window onto the Beam.

Top of the political food train are the Ryan brothers. With a nod towards the TV format Isaac is head of the Directorate while his younger brother, Micah, is head of the Enterprise party. We also have Isaac’s wife, Natasha, and his speech writer, Nicolai. Not forgetting Doc Stahl who supplies Nicolai with very expensive technical augmentations. These can be anything from enhanced strength to brain implants giving new skills. The high-end escort and occasional assassin Kai Dreyfus completes the high society cast of characters.

At the other end of the scale, we have Crumb and Leah of the hippy movement Organa. This is led by the enigmatic Leo Booker who isn’t so much anti-tech as anti-Beam. The other notable character at this end of the food chain is the Police Captain Dominic Long.

In this first series, the high society characters pursue a very different story arc to the Organa characters and Police Captain Dominic. In fact, there is only one fleeting touch point between the two groups. There are multiple story arc but they can be grouped into those associated with the Ryan bothers and those associated with the Organa movement.

The main problem with these multiple story arcs is that one set of characters can disappear for long periods of time. Nicolai, Doc and Kai become mixed up in an alleged industrial espionage incident and this story takes time to resolve. You do wonder what’s happening to Leah, Crumb Leo and Captain Dominic while all this is going on.

When we do catch up with the other group we find the mostly good police captain has having an ‘interesting’ time while Leah and Leo realise there may be far more to the village idiot Crumb. It takes them into the city on a voyage of discovery.

I should say that I enjoyed reading ‘The Beam: Season 1’. The various story arcs reach an appropriate point at which to pause while you arrange to get hold of Season 2. The characters are interesting with good back stories but what really get my attention was the world the story was set in. A lot of thought has been put into making this a coherent future environment both in terms of its political structure and its technological advancements.

There are some very good ideas behind ‘The Beam: Season 1’ and an eclectic cast of characters which make for a good read. It doesn’t conclude the story arcs but acts as a launch point for Season 2. At the time of writing Season 3 is also available.