As ‘Diamonds Are Forever’ faded into the cinematic past, and Sean Connery walked off into the sunset with a large amount of EON Production’s cash, it was time for a new era in the Bond franchise. Enter Roger Moore, who had made his name on TV shows such as ‘The Saint’ and ‘The Persuaders’ who would be ready to bring his brand of English suavity to the world’s most famous secret agent. His opening salvo would be ‘Live And Let Die’, a loose adaptation of Ian Fleming’s novel that would also take its inspiration from the Blaxploitation films popular at the time. Somewhere along the way, it was decided that he would make a diary of his experiences. Originally printed in 1973, ‘The 007 Diaries’ is a fascinating account of not only a pivotal moment in the history of the Bond franchise but a small window into British filmmaking of the early 70s. 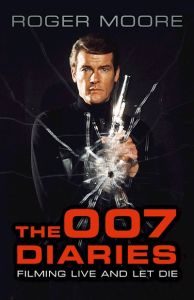 Initially, it’s important to note initially that it appears that the diaries were always intended for publication as a promotional tie-in, so anyone looking for Moore being indiscreet will be disappointed. Of course, Moore always seemed to be the perfect English gentleman and one would doubt that, even in his own most private correspondence, Moore would be anything other than the sole of discretion. This persona shines through the diary, there’s a sense a dry wit, a hint of self-deprecation and a chivalrous nature. A case in point would be his relationship with Jane Seymour. In the film, she’s his main love interest but, in the diary, he points out how he promised Richard Attenborough, then Seymour’s father-in-law, that he would look after her. An account of a love scene between the two contrasts the hot and steamy on screen antics with the reality of them freezing to death on a Pinewood studio and giggling under the sheets.

Of course, much of the diary deals with the divide between fantasy and reality. The fantastical chase sequences are recounted with the tedious setting-up and repetition to get the perfect shot. There are also moments which would seem unthinkable in today’s era, thanks to health and safety. Boats crash into wedding parties. Actors and crew stand around live crocodiles. Moore himself messes up his leg early the shoot. Nowadays, there would be an insurer having a heart attack and wondering why it can’t be done in front of a green screen.

As always, reality is also far from the truth. The bad guys, such as Julius ‘Tee Hee’ Harris, are shown to be a lovely and sweet group of men. Even Yaphet Kotto, whose Black Power militancy put him in conflict with much of the crew, is given cautious praise even when Moore reveals some of the more spiky aspects to his personality that appear when they are shooting their now infamous final fight sequence.

There are a few other fun revelations. Crocodile keeper Ross Kananga, who also lends his name to the film’s chief villain, seems to have become something of a favourite of Moore and the rest of the crew and comes in for much affection from Moore. Even if Kananga constantly wishes that a crocodile will bite at least one of the crew so that it ‘teaches them a lesson.’ Moore’s relationship with producer Harry Saltzman, in his penultimate Bond film, is also given some nice background with Saltzman being the typical producer by worrying about money and trying to win Moore’s salary back in a number of card games.

Moore offers a small insight into his family life, with his children joining the ‘Live And Let Die’ shoot and his wife Luisa coming across as a loving if slightly feisty presence. It’s hard to have a wife who is prone to being slightly jealous when you’re portraying the lothario that is James Bond….

Moore’s chivalry sometimes falters when it comes to journalists. You can see him realising just how constant the hounding from the international press corps will be and, considering that was one of the reasons that Connery left the franchise, there is a slight sense of mounting despair at what he will have to face in the future. Especially when he is constantly asked the same question, namely ‘How will you be different from Sean?’

Aside from contemporary introduction from David Hedison, who plays Felix Leiter in the film, who gives a glowing eulogy to his and Moore’s friendship, there is also an editor’s note explaining that attitudes expressed in the book are of the time. It does create worry that Moore will end up being rather backwards in his outlook on society but he comes across as somewhat progressive, he laments the fact that the producers didn’t have the guts to make his lead love interest a person of colour, even when you consider that, as a film, Live And Let Die is somewhat problematic in the modern day. While it’s true that he gets to bed Rosie Carver and Moore has nothing but positive things to say about actress Gloria Hendry, she is still relegated somewhat to the sidelines and rather unceremoniously offed.

There is a sense of the utopian in this book with the life of an actor being an endless round of nice hotels, exotic locations and sumptuous meals with the moments of having to stand in front of the camera and do things somewhat of an inconvenience. But the diary also does point out the tediousness of filming and the long days and the family atmosphere created amongst a film crew.

It’s a fun and informative read that will appeal mostly to Bond fans with it given a glimpse behind the scenes as well as revealing the gap between ‘James Bond’ and reality. 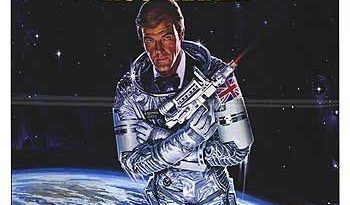