Coming across a reference to Poul Anderson’s book, ‘Tau Zero’, recently, I realised it was one of the few significant SF books of the Golden Age that I hadn’t actually read. I think, at the time, I hadn’t realised what the term ‘tau zero’ actually meant. Now I do. Basically, the closer your velocity reaches the speed of light, the larger your mass or symbolically your tau becomes. In other words, your starship become bigger getting close to that speed. 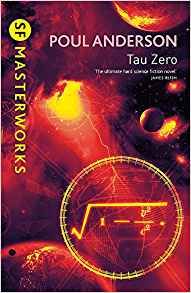 Travelling near the speed of light, the starship Leonara Christine is going to take 5 years to get to our nearest star system, Tau Ceti. There lies the confusion of having both things identified with the same word. Following through the explanations of travelling up to the speed of light using a Bussard ramjet to draw in stellar matter fuel and how quickly contact with Earth is lost, it encounters a small nebula that damages their starship and the crew find that they can’t decelerate. If you know your Einstein physics, you will also realise that they are also expanding and need to get into interstellar space to have a hope to repair the decelerators but time (sic) is working against them.

Into all of this, we get samples of life on-board, mostly dealing with relationships and how they change. Bearing in mind when the book was written back in the late 1960s, SF authors were still pretty coy about relationships let alone promiscuity. Reading it now, you can understand the implications behind the words more than anything but back then, any author had to be careful where they tread, not knowing who they might upset.

Again, you have to make allowances for when this book was written. Would we really send a majority of passengers on an interstellar journey when they have had no experience of even the likes of free fall let alone never been in space before? We know a lot more this now but if you think about a lot of the Golden Age SF, it was never seen unusual for inexperienced people to jump in a spaceship and off to the stars as if it was something anyone could do, even in a futuristic age.

Unusually, the crew themselves are mostly Nordic, hardly surprising when you consider where Anderson was born. Overall, there is an international selection of people with psyche tests to ensure compatibility although, from the looks of this book, that wasn’t quite as successful as it could have been. Anderson only does a sample of this beyond the crew but you have to wonder if anyone missed out. Well, one did but he ended up being an important scientist. Although the starship had a police officer, Charles ‘Carl’ Reymont who kept things in check and who ultimately their greatest motivator to getting them to solve the problems.

I can see how ‘Tau Zero’ is so highly regarded from a hard SF point of view as you get to see how Einsteinian physics works in reality and even the Bussard collector of matter to power it. Something I did wonder about was that if the starship grows in size then surely its engines would be collecting stars as energy sources. There’s a hint of this on page 118 but you would think there would be some regard to the fact that they might be destroying star systems at this point although, to be fair, they do move to interstellar space. If anyone is planning to write a similar story, they might want to explore this problem. Anderson wrote this book at a time when few SF novels exceeded 200 pages so probably glossed over that pertinent area.

In some respects, the ending, which I’ve avoided giving, has some shades of James Blish’s ‘A Clash Of Symbols’ (aka ‘The Triumph Of Time’), the final book of the ‘Cities In Flight’/Spindizzy series and how the universe continually recreates itself. Certainly, if you travel fast enough then relative time will make local time seem insignificant as centuries flash by.

If you’re planning to write a hard Science Fiction novel, then you should certainly spend some time reading this book. Anderson explains this knowledge in the context of the novel without coming over too preachy. The fact that it was written in the 1960s and we are seeing some of what he says about interstellar space being used by scientists today looking for alien life in the galaxy really does show how far ahead Anderson’s thinking was.