Relative newcomer Paul Briggs brings us a cli-fi novel with an eye-catching and dramatic cover in the form of ‘Altered Seasons: Monsoonrise’. Cli-fi, by the way, is climate fiction, this being a near-future story of climate change, which is one of those categories that skirts the edges of SF in that it’s slightly in the future and includes a few scientific advances but mostly posits a what-if future based on current trends. The colon in the title suggests that this may be the first in a series but I actually added that myself for stylistic reasons, there isn’t one on the cover of the review copy I’m reading and I’m not sure if there should be. 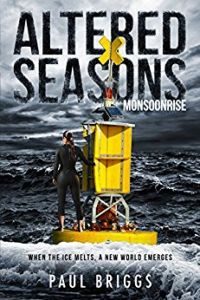 Anyway, about the book, which is written in an informal, chatty kind of a way, a bit like this review so far. There are several different characters and lots of climate-related events going on over the course of several seasons, giving the whole story a long range feel of building momentum.

I’ll just pause here to mention that every now and then the author pauses to let us know something that may or may not be important, but which kind of interrupts the flow of the narrative. He also includes Vancian* footnotes, regular explanations in parentheses (like this) and direct addresses to the reader that break the fourth wall. A lot of this could be written off as personal choice, dear reader, but they’re things which I find distract from the actual story which, as it happens, was quite well able to keep my attention on its own merits.

As I mentioned, there is a nice selection of characters, each dealing with different aspects of the environmental disasters. Engineer Isabel Bradshaw and Governor Carrie Camberg mostly, but with a few others thrown in. The US President, a talk-show host and inventor, along with various friends, relatives and co-workers. Isabel Bradshaw, in particular, is an interesting character with a well-developed background. There’s a lot of detail on the progress of the monsoons and associated phenomenon which all sound convincing, though it’s a long time since I finished my Environmental Science degree and climate wasn’t the bit I was concentrating on at the time.

The tone of the book is generally quite light-hearted, despite the environmental disasters and large-scale destruction going on in the background. This is partly due to the aforementioned informal style, but also the self-deprecating internal dialogue of Isabel Bradshaw. The plot moves along breezily, cataloguing the on-going effects of global warming and socio-political consequences for mankind in general along with the personal consequences for the characters and particularly for Isabel’s family.

It’s more of a series of incidents than a defined plot with an end-point, but it all follows along nicely and I got quite caught up in the personal dramas of the players. All in all, this was an enjoyable book and I’d quite happily read the next volume to see what becomes of them all.